As part of being self-contained, the Palmer generates its own fresh drinking water from seawater. At maximum capacity, over 15,000 liters of fresh water can be produced each day. Typically, between 9,000 and 10,000 liters are produced. Fresh water is used in living areas for showers and sinks, the galley, for laboratory work, and for rinsing gear once it is recovered from a deployment. If equipment is not rinsed in freshwater, salt crystals can form as seawater evaporates, breaking seals and lodging between moving parts. In addition to reducing salt crystal formation, rinsing gear in fresh water slows rusting. 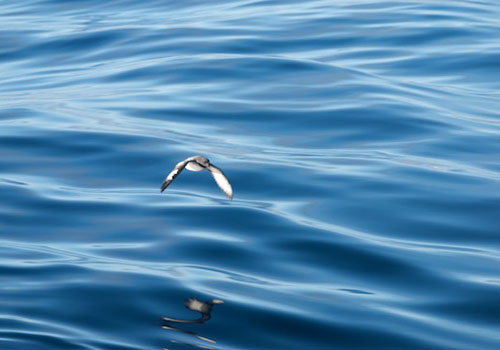 Seawater from directly outside of the ship is converted to freshwater for our needs. Above, a Cape Petrel is reflected in the Weddell Sea’s glassy surface during an fleeting moment of calm from both swells and wind. Photo by Debbie Nail Meyer.

Other than for rinsing equipment, fresh water is not necessary for deck work. Ocean water washes over the deck anyway, so seawater is used to hose off the deck after deployments or to wash off bird droppings. Spraying the deck with water is less common on this ship than on others because water on the deck is likely to freeze. Though the decks of the Palmer are heated to reduce ice formation, ice is more likely to form when excess water is on the deck.

A flash/evap system produces the fresh water on the ship. The system uses flash heating to vaporize seawater. Evaporation separates the fresh water—which is vaporized into the air—from salts and contaminants, which are left sitting at the bottom of the container. The water vapor condenses and is drained into a holding tank with a capacity of over 55,000 liters. Water in the holding tank is filtered and irradiated with ultraviolet light to kill any pathogens before being pumped through the ship in Teflon-coated pipes. The efficiency of the flash/evap system is enhanced by the cold temperature of the polar water—near-freezing seawater is pumped through pipes that cool water vapor quickly, speeding up the condensation process.

Producing its own fresh water helps make the Palmer a self-sufficient vessel.