Our first introduction to the wastewater system on the Palmer was the extremely loud flush of the ship’s toilets. In about three seconds, the toilet begins to rumble, then rapidly crescendos to a loud gasp of suction until it becomes an abrupt hiccup, followed by silence. The loud flush can be heard a few rooms away, and admittedly, took some time to get accustomed to.

The loud flush of the toilet (called the head at sea) is related to the vacuum plumbing system. A spring-held piston prevents suction until the toilet is activated to flush. Shower and sink drains use a vacuum scupper. This consists of a hollow, plastic half-sphere seated over the vacuum system. When water flows into the scupper, the half-sphere floats and allows the suction of the vacuum system to draw the water away. The same vacuum system services the entire ship, so a loss in suction in one drain means a loss of suction everywhere.

The toilet is not the only unique feature of the wastewater system. While most ships use seawater for toilets and non-potable water for showers, the Palmer makes its own fresh, drinkable water and uses it for all of its plumbing. Freshwater systems are free of salts that can corrode pipes. The more typical saltwater system, however, has the advantage that flushing a toilet in the dark may reveal bioluminescent plankton sparkling in the toilet bowl. The pipes on the Palmer are all Teflon-coated, ensuring the water is clean and rust-free. 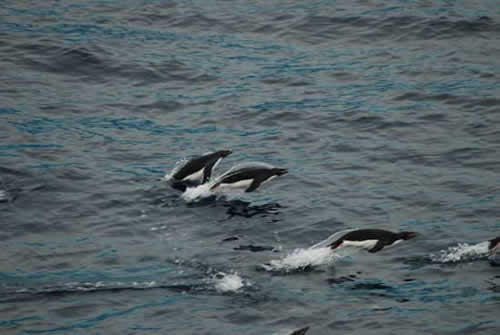 The Palmer treats all wastewater before returning it to the environment, preserving water quality for wildlife like these Adelie penguins. Photo by Johnny Pierce.

All wastewater, including gray water, is treated before being released back into the ocean. Water from the vacuum system drains into a cell with electrical anodes. Electricity converts waste products into inert compounds and carbon dioxide.

The wastewater and vacuum system is vastly different from any systems on land, and differs from those of other ships as well. We may never have caught on to its unique character if it hadn’t been for the roar that accompanied a simple toilet flush.