Rushing to be ready for the cruise

Visiting Antarctic waters is a rare opportunity; for weeks in advance, the science team prepared for the upcoming two-month hiatus from ordinary life in various ways.

Everyone had details to plan, such as finding someone to collect their mail, preparing taxes early or filing an extension for the April 15 deadline, and ensuring that bills, rent, or mortgages would be paid on time in their absence.

Students had to accommodate the trip into their school schedules. Dani Garcia took extra classes in the fall so she could be available during spring for the cruise, but not delay her graduation from the University of San Diego. Cole Hexel defended his Ph.D. thesis two days before he left for Punta Arenas. Mike Fox left a research program in the Caribbean early so he would not miss this opportunity. 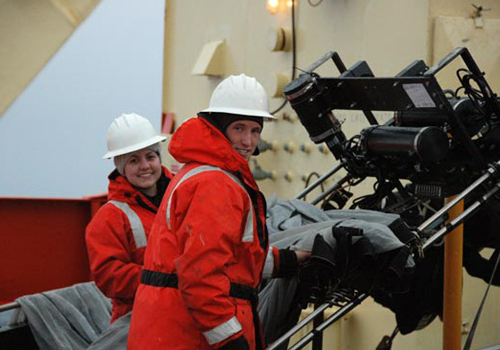 Dani Garcia and Mike Fox stand ready at the MOCNESS trawl. Both rearranged school or work schedules to be available for this cruise. Photo by Larry Lovell.

People also reorganized jobs and responsibilities to come on this cruise. Parents worked out schedules with spouses and grandparents to prepare for the care of their children. Larry Lovell used all of his vacation time (and then some) from his job at the Los Angeles County Sanitation Districts. Jake Ellena signed papers to buy a house the day before his flight to South America. He did not even have a chance to visit the house again once he officially owned it.

Though the stress of working weekends, studying for extra classes, and preparing for a two-month absence was substantial, the cruise participants all realized the rare opportunity before them. Few have been where our cruise has taken us and the memories of icebergs and wildlife and people onboard are worth the trouble we all went through to come here.