Life in the Southern Ocean

The Antarctic has been isolated from the other continents for millions of years. Fossil evidence indicates that subtropical animals once survived on the Antarctic continent, but today, 450 million years after it began its shift from the equator to the South Pole, few species are native to Antarctica. A handful of seal species and nineteen bird species, which consists of penguins and seabirds, make up the large fauna. Mosses and lichens make up most of the flora, along with two grass species that live near the coast. Most of the animal diversity is found offshore in the Southern Ocean. Currents in the Southern Ocean create a barrier between it and the rest of the world for all but seabirds and marine mammals; this isolation facilitates a unique assemblage of life. Today we moved into an area that is rich with icebergs and rich with life.

Fur seals sunned themselves on the water’s surface today, and a few even hauled out on drifting ice. Minke, humpback, and southern right whales have been seen throughout the cruise. Chinstrap penguins waddle up iceberg slopes or float and dive at the water’s surface. 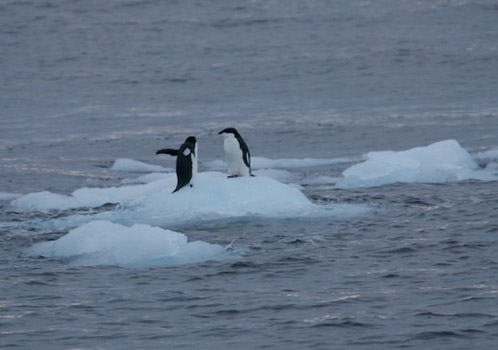 Adele penguins catch a ride on a chunk of ice floating nearby. Photo by Debbie Nail Meyer.

Seabirds include Cape Petrels, Southern Giant Petrels, Antarctic Fulmars, Sooty Shearwaters, and Prions. Seabirds are attracted to disturbances on the sea surface, which in nature often indicates food. When equipment such as the ROV or LSTs disturbs the surface, it attracts the seabirds as well. 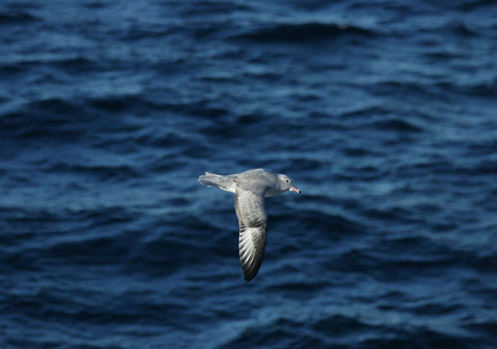 An Antarctic Fulmar is captured in action as it flies past the ship. Photo by Kim Reisenbichler.

In addition to large fauna, the ocean teems with smaller life. Shiny fish cling to subsurface ice as salp chains drift past. Swarms of krill cloud the water just below the surface. The MOCNESS trawls reveal the less common plankton, including jellies, siphonophores such as Diphyes antarctica, and a diverse set of swimming arthropods including krill, amphipods, and decapods.

Smaller still, diatoms and other phytoplankton populate the view under the microscope. These microscopic drifters are the base of the food chain in the Southern Ocean; a few species of algae grow underwater on icebergs, but the water in our study area is too deep (>3000m) for large algae to take hold on the seafloor.