What does it take to be an icebreaker?

The ship we’ve been living on for the past weeks is specialized for its work in polar waters. Unlike most research vessels used for science work, the Palmer is an ice breaker class (RVIB). An ice breaker has three qualities that most ships lack: a reinforced hull able to withstand collisions with ice, a way to break ice, and a method for dealing with becoming enclosed within ice. 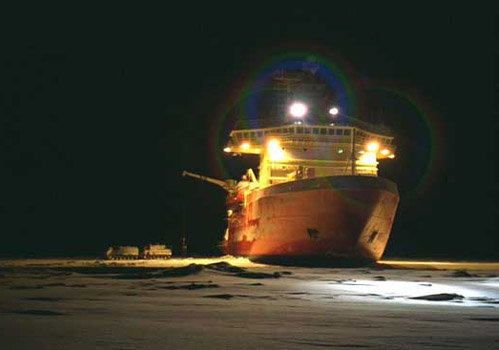 The RVIB Palmer broke through ice to deliver supplies to a research station. Note the trucks parked on the ice next to the starboard side of the ship. Photo by Mike Watson.

The hull of the Palmer is reinforced with framing that is spaced closer together than on other ships to withstand the hazards in polar environments. It is made of polar-class steel, which is tempered to withstand cold temperatures and collisions with ice. An “ice belt” of thick steel extends a few meters above and below the water line to provide a girdle of protection.

During this cruise, we have stayed in the open ocean. On other cruises, the Palmer enters the pack ice and must break its way through. To break the ice, the ship motors powerfully forward. Its pointed hull rides up onto the ice until the weight of the ship cracks a wedge. The ship then reverses direction and repeats the process until a passageway is cleared. The thick rudders are protected from ice collisions by pointing directly to the stern while the Palmer is moving backward.

Chief Mate Sebastian Paoni said that when the ship is breaking through heavy pack ice, the sound of ice cracking and squealing against the hull can be deafening. Some people wear earplugs while others yell to the person beside them to be heard. The sound is loudest in the mess hall, which is just aft of the icebreaking hull and right at the water line.

Mates and an ice pilot on the bridge navigate through breaks and flaws in pack ice rather than plowing ahead in a straight line. In the rare event that the Palmer becomes pinched by ice floes so that it cannot maneuver, a specialized heeling system loosens the hold of ice around the ship. The heeling system consists of two tanks of water on the starboard and port sides of the ship. A thruster moves the water from one tank to the other, causing the ship to rock its way free of the ice. 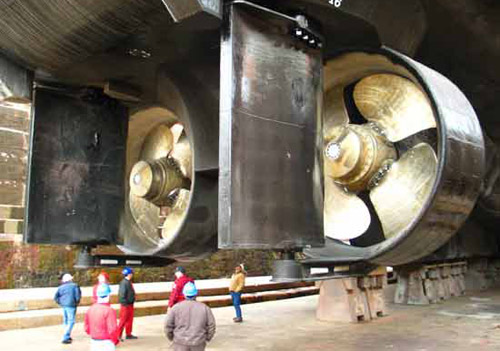 This photo, taken while the RVIB Palmer was in dry dock, shows the ship’s massive propellers and rudders, which are protected from backing into ice by an ice knife above. Photo by Mike Watson.

Captain Mike Watson says that in spite of the reinforcements present on the ship, the best way to navigate through ice is to go around it. For our open ocean cruise, there is no need to break through pack ice, and the bridge keeps constant watch to prevent us from running over any growlers (small icebergs or floes) that might damage the ship.