The National Science Foundation funds the United States Antarctic Program (USAP) science operations. Contractor Raytheon Polar Services Corporation (RPSC) provides science support for the USAP. RPSC interfaces with the ship and its crew, coordinates travel, shipping, and cold weather gear for science groups. Staff at RPSC headquarters in Denver, Colorado have spent a long time ensuring that the required equipment and chemicals for this cruise would be ordered, shipped, and loaded on the ship while in port. Land-based involvement in this cruise has been invaluable, but this post will focus on those who are on the cruise with us. The onboard support staff from RPSC accommodate the science that needs to be done while considering the realities of being at sea.

The marine projects coordinator (MPC) is the logistical coordinator for the science participants and the RPSC staff onboard. Stian Alesandrini oversees the support staff and is the primary contact between the chief scientist, RPSC, and the ship’s captain. He also is the primary contact for groups onshore, including RPSC, the National Science Foundation, and Edison-Chouest Offshore (the ship company that runs the Palmer). 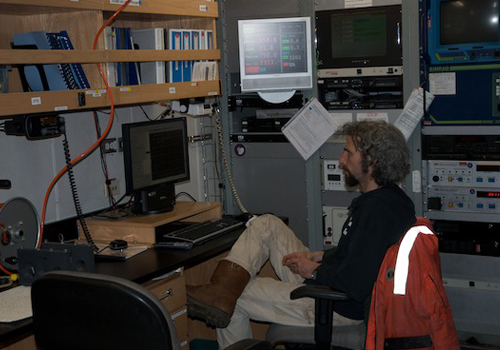 Kris Merrill is our network administrator. She maintains the computer network and email system, and she compiles the science data for all the science groups to take away at the end of the cruise.

Electronics technicians (ETs, Sheldon Blackman and Dan Elsberg) support the electronics of the ship’s scientific instruments. They maintain the electronics for the ship’s underway system, coordinate satellite scans of the regions we are working in, and work with the engineers to interface the science equipment brought onboard with the ship’s electronics.

Marine technicians (Mike Lewis, Jeremy Lucke, Chance Miller, and Randy Sliester) evaluate the safety of each deployment and are the people who actually put equipment in and out of the water. Many of the standard oceanographic instruments, like CTD rosettes and MOCNESS trawls, belong to NSF and are maintained and operated by RPSC staff. They also build and repair equipment for the scientists, whether it is a metal bar that needs to be welded or a trawl net to be sewn. MTs also make sure everything gets onboard and is secured properly before the ship leaves port.

Ethan Norris, our marine science technician (MST) provides lab support for the science groups. He sets up the labs before the ship leaves port, maintains chemical supplies, and monitors lab safety. Every four to six hours, Ethan walks through each lab to ensure safe lab practices are being employed. He will also be responsible for shipping samples back to researchers’ labs after the cruise, including frozen or hazardous samples, which can be difficult to ship.

Finally, Lindsey Eckern is a nutrient technician onboard. She analyzes nitrate, nitrite, silicate, phosphate, and ammonium concentrations from water samples and provides them to the scientists. Lindsey works when there is work to be done—towfish deployments, CTD casts, and incubation experiments dictate her schedule.

The work the science groups needs to get done would not be possible without the support provided by these 10 people.