The number of science crew the Palmer can accommodate is fewer than the number of positions available for the science teams. Some people wear multiple hats, participating with multiple science groups or lending a hand where needed.

The groups that collect water samples, whether for radium analysis, trace metal work, phytoplankton cultures, or microbial diversity, must share water that comes in from CTDs, towfish, and chemistry ROV deployments, which all pump large volumes of water onboard. Cole Hexel helps coordinate and route the water to the different groups, including his own, by sending it through trace-metal-clean tubing he and Scott Kindelberger plumbed to the labs prior to the cruise. Ben Twining works on his own iron research, but also assists Alison Murray’s microbe group with trace-metal-clean procedures. 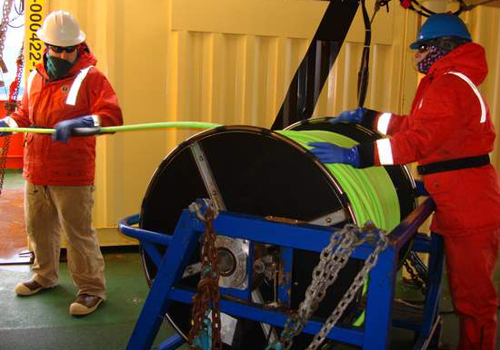 Jake Ellena and Debbie Meyer reel out tether as ROV IceCUBE dives deeper near the iceberg. Photo by Amanda Kahn.

Craig Dawe is the pilot for ROV IceCUBE, but he is also one of the three pilots for the UAVs. The other two pilots, Kim Reisenbichler and Jake Ellena, also serve roles beyond the UAVs. Reisenbichler is involved in ROV deployments, ROV transects for Bruce Robison’s group, and fish identification from MOCNESS trawl samples. Ellena is in charge of managing and organizing data from all of the science groups and is involved in ROV deployments and LST sample processing.

Engineers Alana Sherman and Paul McGill are constantly working on different projects, jumping from tracking the LSTs in the water to swapping components on and off of the ROV or making sure the GPS drop tags are functioning properly. During ROV deployments, Sherman works on deck the whole time while McGill monitors the ROV electronics and radios information to the deck from the ROV control room.

The outreach group, Debbie Meyer and Amanda Kahn, also contributes to science onboard. Meyer, who writes the daily web log, assists with the tether team during ROV deployments, since she has previous tether experience with another MBARI ROV. Kahn, who writes the “Life on the Ship” section, has begun sorting MOCNESS samples along with the MOCNESS group and has helped the trace metal group collect water samples. Meyer and Kahn are also recording photos and videos of science activities that may be used later by the research groups.