Science activities filled the day and every group busied themselves with sample collection and processing. After an early morning deployment of the shallow towfish, ROV IceCUBE was readied to conduct a biology dive for the Robison lab. IceCUBE was lowered into the water and maneuvered toward the face of the iceberg. Unfortunately, the current became too strong for the ship and ROV to hold position. The ROV was brought back on deck and pilot Craig Dawe quickly reconfigured it for a chemistry dive. IceCUBE went back in the water soon after in a slightly different location in hopes that the current would be better. This dive ended successfully with the Shaw, Twining and Murray labs filling sample bottles with water from the ROV. For chemistry dives, the ROV only needs to stay near the iceberg face at a particular depth—still no small feat under difficult dive conditions—while for biology dives, more precise controls and good visibility are important conditions.

Shortly after the ROV dives, the chief scientist and unmanned aerial vehicle (UAV) team decided that conditions were fair enough to fly to the iceberg to drop a GPS tag. With oohs and aahs from onlookers that gathered at various levels of the ship, pilot Kim Reisenbichler and the UAV team launched the first plane of this expedition into the air. The plane circled several times then flew over the top of iceberg C-18A where it released the GPS drop tag it carried, eliciting loud cheers from the viewers. Reisenbichler then continued to fly the plane while the ship turned away from the wind for a landing position. He piloted the craft along the upper edge of the iceberg and minutes later landed it in a net on the ship’s helo deck.

Experience with the first planes used on the June 2008 iceberg cruise lead the UAV team to configure a new plane that was flown today. This plane is bigger, heavier, and has a wider wingspan (2.75 meters). Even with the sturdier design, the plane ideally flies in wind conditions that are less than 15 knots. Today it increased to 21 knots in the short time that the team prepared the plane. The pilot and plane handled the rougher conditions spectacularly, much to the delight of the science team. 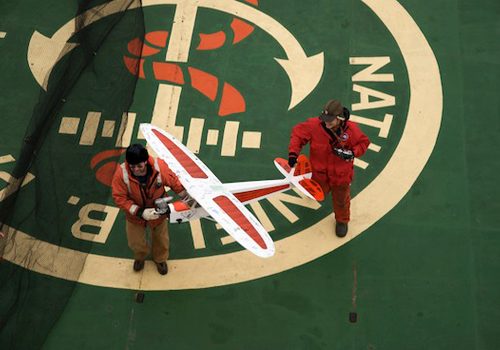 There are four radio-controlled planes in the squadron. Each has been modified for this science mission. A larger fuel tank has been added as well as a video camera and transmitter that send the video over the airwaves back to a receiver on the ship where it is recorded. Special electronics have been added to record position and flight information, such as altitude and speed, that are sent back on the video as a data overlay. The drop tag is attached to an integrated aircraft function that can be commanded remotely; an actuator on the plane pulls a pin to release the tag when the pilot flips a switch on the control box.

The primary purpose of the UAV is to deliver a GPS drop tag to the top of the iceberg. The tag sends a position via satellite every hour and that information is downloaded to MBARI and sent to Paul McGill here on the ship. These positions allow researchers to calculate the speed, direction, and distance that the iceberg moves. It also very importantly helps researchers record an exact position on the iceberg for ROV dives or other sampling, especially as the identifying characteristics on the face of the iceberg are continually changing.

A secondary purpose of the UAV is the video imagery that is transmitted to the ship. The pilot can fly the craft along the upper ice edge and record interesting features that can be seen aerially, like surface meltwater lakes or waterfalls. It is also possible that the camera may be able to image the shelf topography of the iceberg below the waterline due to the clarity of the seawater.