High winds and waves made the seas too rough for most science equipment to be deployed last night. The science schedule was adjusted and the time was used to complete another surface mapping survey. The ship pitched and rolled as it steamed along the sampling grid, especially during turns when the waves were at right angles to the ship. Large swells crashed over the decks and caused loose items in the labs to clatter to the floor. It took effort to stay upright and not bump into walls when walking from lab to lab or up the stairs. And even sleeping required some novel adjustments, like using pillows to keep from rolling about.

Wind and wave action clearly affected properties of the ocean. The ship’s underway seawater system measured higher salinity and lower temperatures than had been seen yet in the surface waters, a sign that the cold, salty waters from below were being mixed by the storm.

By morning, the winds began to decrease but the swell remained. The ROV team monitored weather conditions closely throughout the morning while CTD rosettes and Niskin bottles were deployed to collect samples for other groups. When the water casts were finished, the ship moved north along the face of the iceberg in search of a more protected site to dive ROV IceCUBE. With some expert maneuvering at the ship’s helm, a position near the northeastern tip of the iceberg was selected and IceCUBE was launched into the water. Nearly 400 meters of green tether was rolled out while the vehicle moved toward the iceberg. Unfortunately, strong currents and a malfunction of the vehicle’s compass caused the dive to be ended prematurely. 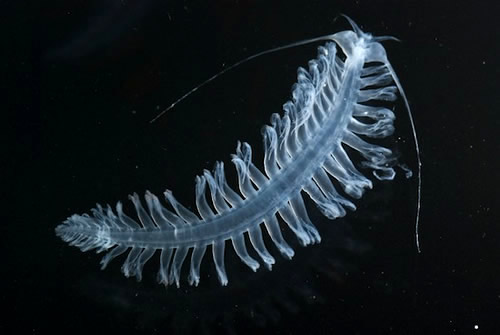 The evening activities concluded with more CTD casts and a deployment of the MOCNESS nets. Heavy snow flurries began before midnight, making the ship appear to be inside of a snow globe toy. The ice tower lookout, more than ten meters above the bridge, gave beautiful views of the snow and the nearby iceberg in the ship’s spotlight.