Stormy seas with winds gusting more than 45 knots curtailed science operations this morning. As the ship rocked and rolled, the zooplankton team sorted net samples from the late-night tow of the MOCNESS system. Later this afternoon, the ship tucked in beside the iceberg for a slightly calmer location to launch a CTD rosette cast. Tonight the ship will move away from the iceberg to conduct a surface mapping survey, a science operation that can take place in high winds and seas. Everyone is preparing for the bumpy ride by securing lab experiments and loose items in their working areas. 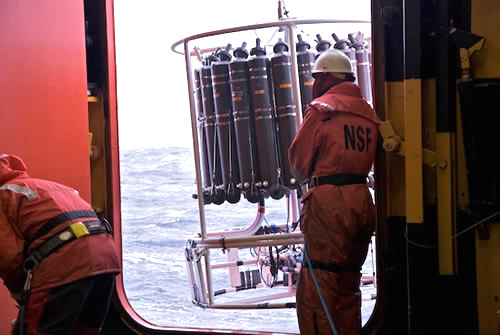 A CTD rosette is lowered into the ocean on a rough day. Photo by Debbie Nail Meyer.

In addition to the radium studies described yesterday, the Shaw lab is sampling peroxides and superoxide in the ocean. Current research suggests that oxides might play a role in the iron (Fe(II) and Fe(III)) cycling but there are few measurements of oxides in the Southern Ocean, particularly near icebergs.

Hydrogen peroxide and superoxide are short-lived and must be processed at sea. Water is collected with the trace-metal-clean towfish at less than ten meters deep. Shaw’s graduate student, Scott Kindelberger, works in the trace metal van alongside Hai Lin who is processing iron samples from water collected at the same time. Kindelberger uses a similar instrument to Lin’s, called a flow-injection chemiluminescence or FeLume, which he has customized with five chemical reagants.

Timing is critical for the reagents that Kindelberger uses in the peroxide experiments. First, he needs a seven-hour window prior to the water collection for preparing the reagents. Hydrogen peroxide is ubiquitous in water and an enzyme is used to suppress the background concentrations, a process that takes six hours. Once ready, Kindelberger must use up the reagents within six hours before the contaminating hydrogen peroxide levels return.

Additional water samples are saved at the same time for processing back at the Shaw lab in South Carolina. These will be analyzed for rare earth elements that are tracers for the sources of the terrestrial materials.