Ocean chemistry in the Antarctic

The ship returned to C-18A this morning and a second round of sampling began. Two Lagrangian sediment traps were deployed this afternoon: one was sent under the iceberg and the other was released as the experimental control in a location away from the iceberg. The MOCNESS-10m2 net system is currently towing behind the ship and will be recovered before sunrise tomorrow morning. By returning to C-18A, the research team can investigate how waters around the iceberg have changed since the first sampling effort, and can fill any sampling gaps to make their datasets more complete.

The chemistry group—Tim Shaw, Cole Hexel, and Scott Kindelberger—has been quietly taking samples and providing behind-the-scenes support for many of the research groups involved in this study. In addition to pursuing their own research interests, they implemented the trace-metal-clean seawater infrastructure that other groups onboard have utilized for their experiments. Hexel and Kindelberger arrived several days before the expedition to construct the trace-metal clean working area and the network of tubing that delivers seawater from the towfish and ROV. 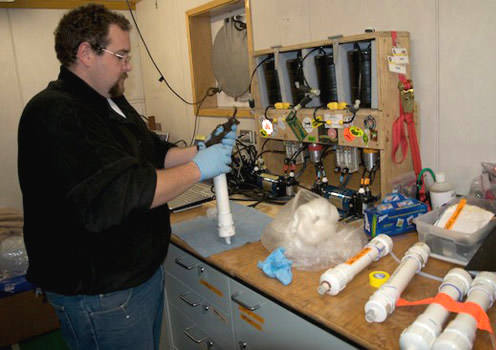 Chemist Cole Hexel places a radium sample in a cartrdge for analysis in the delayed coincidence counter in front of him. The instrument measures the time between the release of photons from the sample to identify radioisotopes. Photo by Debbie Nail Meyer.

Shaw’s research interests include studies of radium isotopes used as tracers. Radium is a naturally occurring radionuclide found on land worldwide. The isotope 224Ra makes a useful tracer because of its short half-life. In about three and a half days, 224Ra decays into another isotope which is less than the time it would take to travel from far away sources. If 224Ra is measured in a seawater sample near an iceberg, the melting iceberg must be the source of the 224Ra; it can be inferred that other terrestrially-derived materials are coming from the iceberg, too. The short half-life also means that 224Ra experiments must be done at sea.

Large volumes of seawater are needed to study radium because its concentrations are so low—detectable at seven atoms per liter. Hexel uses the ship’s seawater system to collect 1000 liters of water, storing it in large pickle barrels (inexpensive containers that the team purchased and sent from South Carolina for the experiments). It takes about a day to extract this volume onto a cartridge that traps the radium. The resulting filtered material is rinsed and measured in a delayed coincidence counter, an instrument that determines the identity of radioactive material by its unique decay signal. Hexel has been sampling up to three times a day and has analyzed between 70 and 80 samples for the 224Ra dataset.

In addition to at-sea analysis, the extracted radium samples are further processed weeks later in the Shaw lab to calculate inventories of longer-lived radium isotopes.