Today began as one of the chilliest yet, with a -23°C wind chill, but the colder, drier air and peeks of sunlight were a welcome relief from the foggy and wet days that have been more common.

The next iceberg target continues to elude the research team. We’ve been pursuing possible icebergs identified through satellite measurements, but we can’t see until we arrive whether the satellite image is a large iceberg or a conglomeration of many small icebergs and pack ice. We also have been on the lookout opportunistically for icebergs smaller than satellites can detect, but that are at least a few kilometers long. Today we investigated several potential targets and passed through an area with more icebergs than we’ve seen yet—affording many photo opportunities—but none was large enough or isolated enough for study. 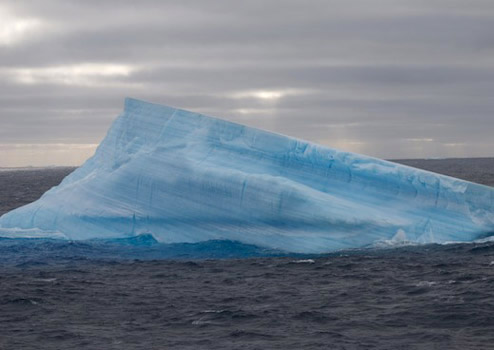 The icebergs and growlers that we passed today have been many shapes, sizes, and color variations. White, blue, green, and streaks of brown make each one unique. An iceberg’s life cycle determines many of these characteristics as it drifts through the sea. Flat, tabular icebergs break off (calve) from the Antarctic ice shelf and begin with this composition and structure. Accumulation, freezing, and melting cycles can be seen as annual layers on icebergs. The freeboard of an iceberg, the part that can be seen above the water, is mostly compressed snow or ice particles and air, giving the iceberg its overall white color. Solid ice is formed tens of meters under the snow where high pressure compresses air bubbles so completely that air no longer scatters light, resulting in a blue color. This compressed air is sealed from the atmosphere and is what scientists measure in ice cores to learn about the Earth’s atmosphere thousands of years ago. 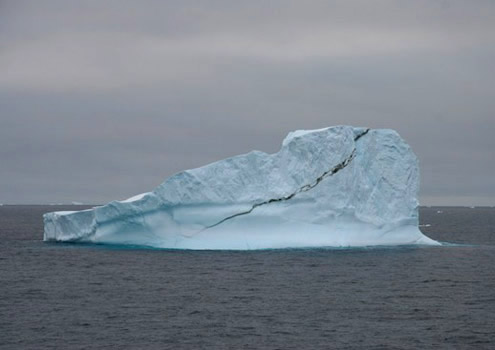 Veins of gray are crushed rock materials from the continent that were incorporated into the parent ice shelf. Stripes can form where meltwater from the surface freezes into cracks and crevices, with colors dependent on its composition. Browns and greens come from biological organisms. Green ice forms when algae-rich seawater freezes along the ice shelf where the iceberg originated or from pools created as the iceberg melts; this process results in blue colors if the freezing seawater lacks algae.

As icebergs melt and break apart, shapes change and color variations are revealed. Waves can carve out hollows and arches, and smaller icebergs can even be tumbled by rough seas like boulders in a river. Seeing the range of iceberg shapes and colors today was a reminder that the large, flat icebergs targeted in this study may conceal an inner beauty under layers of white.