From one iceberg to the next

Yesterday evening, the principal investigators analyzed measurements around iceberg B-15L to determine if it could be the next study site. Late last night they decided to move on to another iceberg when measurements of high chlorophyll and low salinity suggested that the effect of nearby pack ice would make it too difficult to tease out the iceberg’s signal.

The ship began sailing northwest toward the location of TK-231, a potential iceberg that has been identified and tracked by David Long’s group via satellite. As we’ve been transiting throughout the day, we have hoped to encounter a smaller iceberg, at least two kilometers long, that we could study in this region. These icebergs are too small to be detected reliably by satellites. The officers on the bridge and an able-bodied seaman lookout are monitoring the ship’s radar and keeping a special watch for possible icebergs. The lookout also watches for growlers, low-lying (less than one meter above the water line), grand piano-sized ice chunks that can damage a ship’s hull and must be avoided. Cold, wet, and foggy weather has made this duty more challenging as visibility has been quite limited. 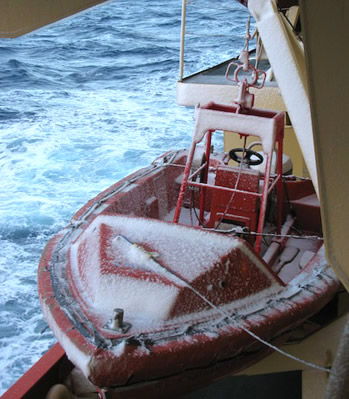 A coating of snow collects on a workboat located below the starboard lifeboat. Photo by Gordy Stephenson.