B-15, the world’s largest iceberg

Today we arrived at iceberg B-15L, a long, tabular iceberg similar to C-18A in appearance and size (28 kilometers long by 12 kilometers wide). We began by circumnavigating around the iceberg to assess its shape and the direction of its drift. 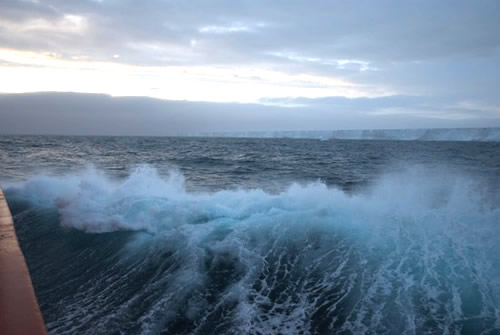 View of iceberg B-15L as the ship circumnavigates around it. Photo by Debbie Nail Meyer.

This iceberg is a fragment of the famous B-15, the world’s largest iceberg: B-15 was nearly the size of Connecticut when it calved from the Ross Ice Shelf in March 2000. It subsequently broke into fragments, the largest of which, B-15A (the size of Rhode Island), made news itself when scientists reported that a distant storm in Alaska generated an ocean swell that broke it into pieces in 2005.

We have just begun taking measurements around B-15L and there have already been some unexpected results. Data from the ship’s continuous seawater system, which the Vernet lab is sampling for nutrients and phytoplankton, has shown much higher values of fluorescence—a proxy for phytoplankton abundance—than the waters around C-18A. In addition, concentrated seawater samples that have been analyzed under a microscope contain numerous large phytoplankton species, such as the diatom Chaetoceros. These observations suggest that the waters may not be iron-limited and that the nearby pack ice might be a more significant factor for phytoplankton abundance than the iceberg.

As with many oceanographic studies, there are few published observations in this area that researchers can consult. Indeed, measurements made during this cruise are likely to be the first that have been made in these areas at this time of year. So, every sample is contributing to a larger understanding of the Southern Ocean.

To better assess the situation around B-15L, the principal investigators decided to obtain iron measurements. The Twining lab deployed their trace-metal-clean Niskin bottles near the iceberg. Then the ship began a transit toward the pack ice so that the researchers could monitor chemical signatures in the underway seawater system. These observations will help the team decide whether to stay and study B-15L or to search for a different iceberg further from the pack ice.