Through the night, the ship completed a final surface mapping of iceberg C-18A, returning to the same area where measurements first took place at the beginning of the study. Preliminary results were presented at today’s science meeting and the principal investigators summarized their findings thus far.

There is a lot of anticipation about the next iceberg, B-15L, located about 560km southeast from C-18A in the central Weddell Sea. Previous researchers have measured high nutrients but low chlorophyll in this area—just the place where an iron-carrying iceberg might be seen to increase productivity. We’ll arrive around mid-afternoon tomorrow and begin characterizing the iceberg and the surrounding waters.

The journey so far has been filled with amazing scenery and wildlife. We passed many smaller icebergs today, some with bright blue stripes and dramatic arches, others with translucent bases and even a few penguins. At one point this afternoon, a group of icebergs, each with different shapes, features, and colors, were surrounded by flocks of seabirds, some whales, and fur seals. The crew on the bridge alerted us and many took breaks from their activities to photograph the icebergs as the ship sailed by. 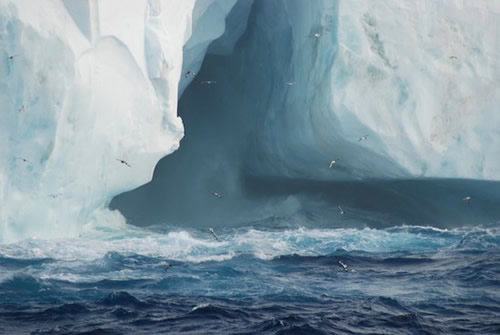 Seabirds in flight around an iceberg in the Weddell Sea. Photo by Johnny Pierce.

Several labs continued experiments during this transit day. In the Murray lab’s seawater enrichment experiment, the non-light incubations were completed today. The whole group (Alison Murray, Vivian Peng, and Alison Kelley) processed the final samples to harvest biomass and conducted assays that will be used to measure growth and activity rates for the bacterioplankton in the samples. The corresponding light incubations, including the phytoplankton work by Vernet’s lab, should finish in the next week. Both groups are preparing to start a second experiment with water collected at the next iceberg. 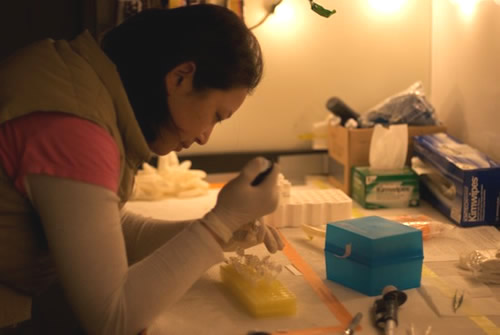