The calm before the storm

Today ended up being our last day near iceberg C-18A. Though the weather improved considerably from the night before, satellites show a large storm system moving toward us within the next 24 hours. We took advantage of the calm before the storm by squeezing in as much sampling as possible, including two ROV dives. The morning dive, with IceCUBE still in its chemistry configuration, provided seawater from the face of the berg primarily to the Murray and Twining labs for work on bacterioplankton and iron. Then pilot Craig Dawe and the ROV team quickly switched the vehicle to the biology configuration to allow an afternoon dive for the Robison lab. The few rays of sunlight helped reveal more midwater critters during the dive, including some fish and jellyfish, and video transects were completed near the iceberg.

Several posts have referred to the concept “trace metal clean” that is so important for the iron studies currently underway. Concentrations of iron in the ocean are extremely low—often 1,000 times lower than in common tap water—and numerous cleaning and handling steps are necessary to keep contaminants from entering samples. Ben Twining and graduate student Hai Lin work together to make sure the clean protocols are followed when they deploy instruments and handle samples for their iron studies. 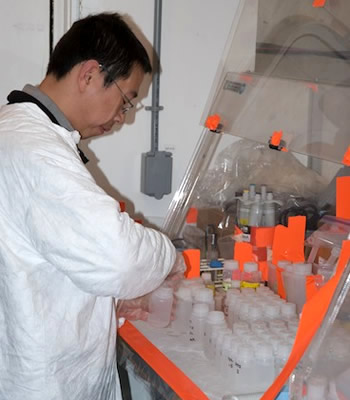 Before coming to sea, Twining and Lin spent several weeks preparing the more than 1,000 plastic bottles that they’ll use. First, bottles were washed in a weak detergent and rinsed with high-purity deionized water. The bottles were then soaked in a concentrated hydrochloric acid solution and rinsed three times before being soaked in a nitric acid solution. They were rinsed five more times, dried in a laminar flow hood, and triple-bagged for shipping and storing in the lab on the ship.

The trace metal, or TM, van serves as the primary laboratory for the iron studies. The van is outfitted with several air filters and a working area that can be closed off by a sliding glass door; gloves and special lab coats are required attire for this area. Many operations require two people, one with “clean hands” to handle sample bottles and inner bags, and a second person with “dirty hands” to open doors and handle other unclean objects.

Over the last 24 hours, Twining and Lin have collected fifty-three samples from Niskin bottles, towfish, and the ROV. It will take them several days to process these samples at sea. In addition, an archive sample is saved to send back to their laboratory on shore. The at-sea iron measurements help the science teams in this study determine sampling stations around the icebergs. The measurements can also provide an early warning to contamination, such as a bottle getting ship material in it, that then can be fixed at sea before the next sampling.