Sampling near and far

To better characterize the influence of the iceberg on surrounding waters, sampling has been divided into near and far stations. Surface mapping early in the study of iceberg C-18A established a background of typical open ocean parameters, such as temperature and salinity, to help the science team determine these sampling stations. For example, salinity data revealed a defined gradient in waters that the iceberg has passed through, with significantly fresher waters near the iceberg. Though the researchers hypothesized that fresh meltwater would leave a salinity signature, they did not know how far that signature extended until they completed the surface mapping. Equipped with this knowledge, they established sampling stations within and outside of the iceberg’s influence. The absolute positions of the sampling sites have changed during the study as the iceberg drifts generally to the north. 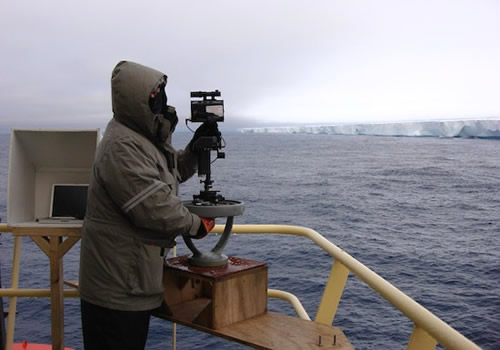 For more than a week, coordinating sampling events with the realities of weather has required some effort to ensure that each group has what they need for their experiments and observations. All of the ROV dives take place with the ship near the iceberg, which allows the ROV to sample right at the face of the ice. Likewise, laser mapping and bird surveys happen close to the iceberg. MOCNESS nets have been towed at various distances near and far from the iceberg. Other water sampling methods—CTD, trace-metal-clean Niskin bottles, and towfish—have been sampling half the time at near stations and half the time at far stations.

These last few days at iceberg C-18A are focused on filling any sampling gaps. Unfortunately, today the weather did not cooperate with the schedule. A thick fog delayed the morning’s ROV dive and when visibility finally returned, strong currents near the iceberg ultimately cancelled the dive. Even with plans changing significantly throughout the day, however, researchers completed a large-water-volume CTD series and a late evening deployment of trace-metal-clean Niskin bottles, in addition to ongoing laboratory efforts.