The morning began with high hopes tempered with worry as engineers Alana Sherman and Paul McGill attempted to find and recover the wayward Lagrangian Sediment Trap (LST). Yesterday, no one knew if the LST had heard the call to come to the surface. They detected faint signals but couldn’t confirm that its acoustic modem was receiving their commands. After several hours yesterday, they suspended their search until today, when the LST’s pre-programmed release was scheduled to happen.

Sherman and McGill checked and re-checked calculations to estimate when and where the LST might surface and they studied radar images of the iceberg’s track on the bridge. The ship traveled in a search pattern around the site where the instrument had been lowered into the ocean two days before. Back at MBARI, team member Brett Hobson awaited an email from the Argos satellite system that would transmit the position of the LST from a transmitter on its antenna once it floated to the surface of the water.

Just before lunchtime, Hobson called the ship to report an Argos fix, delivering a ray of hope to everyone on the bridge. McGill readied the VHF receivers and the ship moved toward the Argos position.

Eight and a half kilometers north of where it had been placed in the ocean three days before, and only 1.7 kilometers away from the edge of the iceberg, the small orange flag of the LST was spotted bobbing on the sea surface, with curious seabirds flying around it. Sherman jumped up and down in excitement and all on the bridge could feel the anxiety dissipate. 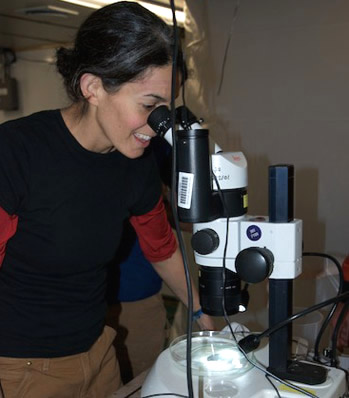 Favorable wind and sea conditions allowed the ship to stay within view of the sediment trap as a Zodiac boat was readied and deployed. Before hauling the LST onboard the Zodiac, Ken Smith secured the samples from the cups of the instrument. Back at the ship, a crowd gathered to congratulate the team and see a sample under the microscope. Some fecal pellets and krill exoskeletons were observed. Now Smith and collaborators Tim Shaw and Maria Vernet will process the samples to examine carbon and rates of export from the surface waters to the deep ocean.