Sampling seawater from the face of the iceberg

For a brief few hours today the weather looked favorable for flying the UAV aircraft to drop GPS tags on the iceberg. The seas were smooth and winds had lessened to only a few knots in the lee of the berg, but it was the sun—or lack of it—that interfered. A thick fog seemed to instantly appear just as the planes were ready. It was amazing how quickly the skies would change from clear to opaque, conditions that eventually cancelled the UAV plans for the day. The schedule then moved to other collections, including a more than three-hour chemistry dive of ROV IceCUBE. Tim Shaw and Ben Twining happily received liters and liters of trace metal clean seawater right at the face of the iceberg, an area only accessible by ROV.

The evening began with a peek of sunlight on iceberg C-18A and some frolicking chinstrap penguins on a nearby floating ice chunk. As midnight approaches, scientists awaiting their next sampling station and crew switching shifts are now gathering in the mess for the mid-rats (midnight rations) mealtime.

Yesterday’s post introduced the study of iron as an essential nutrient for ocean plankton communities. The following paragraphs describe an iron enrichment experiment now underway by Maria Vernet, Alison Murray, and Ben Twining to measure the effects of iceberg-influenced waters on plankton communities.

On Tuesday, researchers collected trace metal clean seawater near iceberg C-18A using the shallow towfish, then repeated this yesterday at a site 16 kilometers away. The seawater traveled from the towfish intake to a spigot in the “bubble,” a clean room constructed of plastic sheeting hung from floor to ceiling in the ship’s wet lab. Inside, an air filter and fan clean incoming air and block external contaminants by creating a positive pressure gradient. Researchers in the “bubble” filled multiple 20-liter bottles from the towfish. 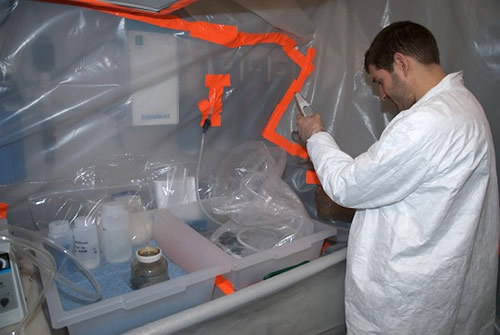 The samples were then divided into two groups, light and dark. In each group, a control and three treatments have been separated into individual four- and eight-liter bottles. One treatment received iron, another carbon, and the third received carbon with iron. The control treatments received no additions. Bottles in the dark group have been placed in black bags to block phytoplankton growth because bacteria get food from the waste of growing phytoplankton, making treatment results difficult to interpret.

During the experiment, the bottles are stored in an environmentally-controlled van in the hold of the ship. A van is a portable 6-meter container that can be lifted on and off a ship and is generally used to provide additional lab space. The “light van” that holds the samples for this experiment has 0°C temperature and blue light within to mimic ocean conditions.

For the next six to ten days while the plankton respond to the treatments, the different research groups will subsample water regularly to take measurements. More on these measurements will be covered in future posts.