The importance of iron

A bleary-eyed MOCNESS team recovered nets again at o’dark-thirty this morning and spent the day sorting through krill, salps, and other denizens of the midwater. Not long after, an LST was lowered into the water where it will drift under iceberg C-18A for the next few days. Then the ship steamed about 16 km away to collect water samples in an area believed to be out of the influence of the iceberg.

These near-to-iceberg and far-from-iceberg water sampling stations have been targeted to test the theory that icebergs may be natural sources of iron to the surrounding seawater.

Iron is essential for life, from microscopic single-celled organisms to complex multi-celled organisms like humans. People need iron so that our hemoglobin can capture oxygen from the air that we breathe. When someone is anemic—has low iron levels in their blood—they are tired and lethargic from oxygen depletion in their bodies. 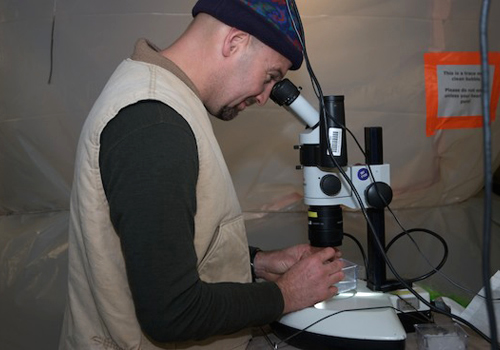 Rob Sherlock uses a microscope to identify an unknown jelly from a MOCNESS trawl. Photo by Debbie Nail Meyer.

In the ocean, iron is needed for photosynthesis by phytoplankton, the microscopic plant-like plankton at the base of the food web. Picoplankton, drifters that are smaller than 2 microns and dominated by single-celled organisms from the domains Bacteria and Archaea, also require iron for respiration.

The role and importance of iron in stimulating plankton blooms has been intensely studied since the early 90’s when biogeochemist John Martin proposed the “iron hypothesis.” Up until then it was assumed that the main nutrients limiting phytoplankton growth in the water column were nitrate, phosphate, and silicate. But researchers could not fully explain observations of areas with high nutrients but low chlorophyll (used as an approximation of phytoplankton abundance) in places like the Southern Ocean around Antarctica. Martin hypothesized that phytoplankton communities would bloom if given small amounts of iron. Subsequent studies supported his theory and work continues to better understand the role of iron and the carbon cycle.

Here on the Palmer, scientists Maria Vernet, Alison Murray, Ben Twining, and Tim Shaw are quantifying the potential of icebergs as a significant source of iron to the surrounding waters. Yesterday the group began an iron enrichment experiment that will continue over the next week and a half. Future posts will explain in more detail about the experiment as it progresses.