Early this morning, the engineering team (Alana Sherman, Paul McGill & Ken Smith) sent a Lagrangian sediment trap (LST) under a smaller iceberg that was about 6 km away from C-18A. The morning passed with the team anxiously monitoring the acoustic communication channels to the LST, and it appeared for awhile that no connection could be made.

The instrument is pre-programmed with a dive mission: it knows how deep to dive, at what intervals to open its collection cups for sampling, and how long to stay under. Then it awaits an acoustic command to close the collection cups, drop its anchor weight and begin the ascent to the surface.

The team first used the hull-mounted low-frequency transducer on the ship to send and receive acoustic signals from the LST. When no response was detected within a few hours, they lowered a second transducer in the water from the aft deck, hypothesizing that the ship’s noise may be drowning the signal. Luckily this worked and they began receiving messages from the LST. Position data—slant range distance to the ship—is embedded in the sound frequencies that the LST’s acoustic modem sends back, similar to how a computer’s telephone modem completes a dial-up connection.

After analyzing the data, the team determined that the LST had moved as planned under the iceberg and was now on the other side ready to come to the surface. They initiated the ascent command and waited for it to appear.

Then it was a matter of finding a very small orange flag in a very large blue ocean agitated by winds up to thirty-five knots. Its position was first estimated by tracking a radio signal that the LST emits when on the surface. Paul McGill was on the ship’s bridge with a VHF antenna and receiver, using it to inform the captain, mates, and the many spotters where to train their binoculars. Many minutes went by until the flag was finally spotted serendipitously by Captain Mike as the ship passed by. A group went out in a small inflatable Zodiac to retrieve it, not without some additional search time from the bridge when the flag went out of view during the Zodiac preparations.

When the LST was safely back onboard the ship, the team celebrated the first successful deployment of a free-drifting sediment trap under an iceberg. The next step is to release it under iceberg C-18A where it will collect data for multiple days. 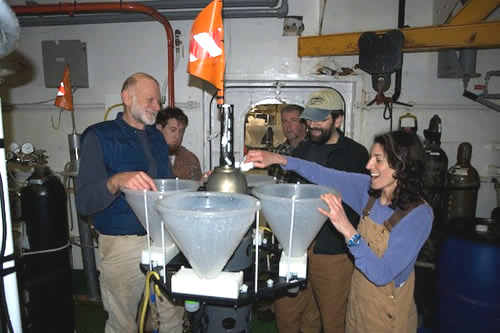 LST team celebrates the first deployment of the instrument under an iceberg. Photo by Debbie Nail Meyer.