We continued our course to iceberg C18a today. At the daily science meeting, the principal investigators planned their equipment deployment and sampling for the first days around the iceberg.

Maria Vernet’s phytoplankton group was first on the list, planning a test of the profiling reflectance radiometer or PRR. The PRR availability was an unexpected research bonus from our detour to King George Island. A missing part for the sensor coincidentally was being transported by ARSV Gould from Palmer Station back to storage in Punta Arenas. Vernet’s group was able to get this part during one of the Zodiac transfers yesterday. The PRR provides additional capability over the profiling ultraviolet sensor (PUV) that they had planned to use in absence of the PRR. The PRR has 19 channels for measuring wavelengths of UV and visible light. This range matches the ocean color satellite data that the team analyzes for phytoplankton production in the sea surface.

A few more instrument tests and some water collections were planned for the late afternoon but the weather did not cooperate. As we steamed ahead toward the iceberg, the winds increased to 25-30 knots and the seas were rough. It became clear that we wouldn’t be deploying any gear. However, it was possible to begin surface mapping, the next main effort on the schedule. John Helly, Maria Vernet, Alison Murray, Ben Twining, Tim Shaw and Ron Kaufmann have been collaborating on this important survey, planning about 18 hours of surface mapping around the iceberg. Results will provide the framework of the sampling strategy for the next eight days we are at this iceberg. 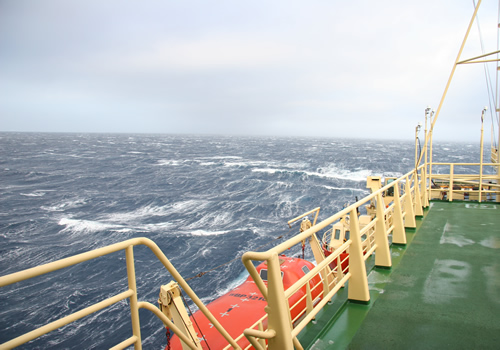 To follow the ship’s track, be sure to check out the map on Google Earth 5.0 as we are sending position information with each daily log. Also, the website, www.sailwx.info/ receives ship position data. Captain Mike Watson’s parents sent a message today about this site as it is one they have used to follow the Palmer on its voyages around Antarctica.