The ship stayed near the Frei field station last night but moved out of the harbor in Maxwell Bay on our way back to Iceberg C18a. After midnight, Ron Kaufmann and his group tested the MOCNESS 10-meter net configuration and found some electrical issues. Together with the electrical and marine techs, they worked into the wee hours of the morning with trial fixes and test deployments. In the end, a 200-meter section of the towing and communication cable was cut and re-terminated.

During the day we continued to stand by in support of the medical evacuation process. Around lunchtime, the R/V Laurence M. Gould came into view. For the next few hours, while Zodiac boat runs took place between the two ships and Frei, people took pictures of the Gould and the scenery around King George Island, and waved to friends and coworkers on the Gould. Patches of green lichens added color to the otherwise rocky shoreline.

Later we left King George Island and headed into deeper water to test ROV IceCUBE in the chemistry configuration. We were lucky to have calm winds and seas to aid in our practice of the launch and recovery process. A new twist today was the addition of extra floats to the tether during the launch to offset the heavy chemistry tether. It’s important to have a slightly buoyant tether so that the ROV can maneuver without being dragged, and so that it won’t pull the ROV down to the seafloor in case of the tether getting severed. The test went smoothly and successfully with IceCUBE completing a dive to 125 meters depth.

Now we are steaming back to iceberg C18a. On the way there, Kaufmann’s group will do another test of the MOCNESS to see if the electrical issues have been fixed. We plan to arrive near the iceberg tomorrow by late afternoon. 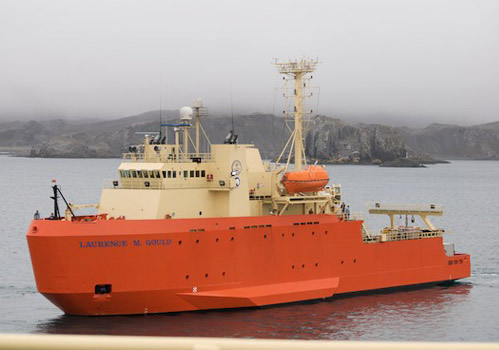