Today our science sampling went on hold as we made a medical detour for one of the ship’s personnel. The Antarctic region is extremely remote and the ship is prepared with trained medical technicians, supplies, and a link to doctors on shore that can be consulted when issues arise. However, sometimes the situation requires more attention than can be provided on the ship and plans must be made for alternate care.

From our working area near iceberg C18a, we transited 18-hours to King George Island where there are several year-round field stations maintained by a multitude of countries. We arrived in the bay near the Chilean station, Frei, where doctors and medical facilities are available. We will likely stay in the area until tomorrow afternoon when the R/V Laurence M. Gould arrives to take over. The Gouldwill be heading back to port in Punta Arenas in the next few days. If the situation was serious enough, transport may have been possible from Chilean aircraft that periodically fly into the airstrip. This is a weather-dependent option, however.

Planning for disruptions is part of the Chief Scientist’s job. Ken Smith has experienced medical evacuations on four previous research cruises and was prepared to keep science moving forward during this one. The engineering team worked on the Lagrangian sediment traps and the GPS drop tags; the UAV pilots prepared the planes; other scientists continued processing water samples and analyzing preliminary data. While we stay near King George’s Island, we’ll proceed with tests of the MOCNESS trawl, the chemistry-configuration ROV, and the deep towfish so that when we return to C18a, we’ll be ready to sample. 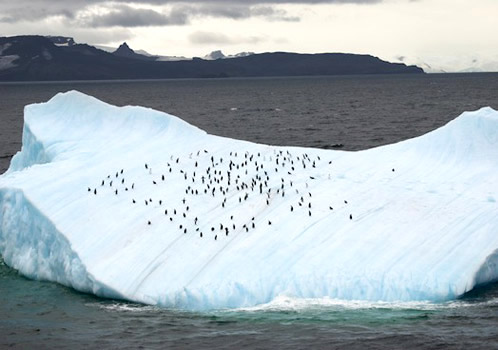 Iceberg with chinstrap and gentoo penguins; King George Island is in the background. Photo by Debbie Meyer.