What does it mean to be “clean?”

This morning began sunny and bright at a location several kilometers away from C18a, where the CTD was used to collect seawater samples. Ben Twining’s group also deployed gear in this area, testing special trace metal clean water bottles.

Midday the ship steamed back toward the iceberg for a second test of ROV IceCUBE. As we positioned on station, we were treated to the presence of a solitary humpback whale hanging out near the iceberg. Later more small groups of humpbacks could be seen feeding along the edge of the iceberg.

The ROV team prepped IceCUBE for chemistry, connecting a special tether that has clear, water-filled tubing attached. Tim Shaw and his team designed this system to use the ROV to pump “clean” or uncontaminated seawater from the vicinity of the iceberg back to the ship for isotope and trace metal studies. The tubing connects to a shipboard network of clean tubing that has been built by Shaw’s group. The clean seawater supply can be accessed in several lab areas so that other researchers can tap into this special system as well. 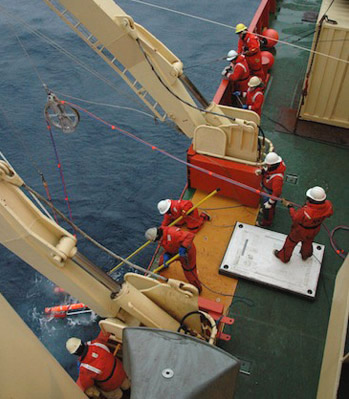 ROV IceCUBE being retrieved from the ocean. The clear tubing, taped to the red tether, pumps clean seawater back to the ship. Photo by Larry Lovell.

What does it mean to be “clean”? The tubing has been filled with a weak acid solution to remove any contaminants that might leach from the food-grade plastic itself. The pump for the water gets turned on when the ROV is well away from the metal-hulled ship. For Shaw’s research, the seawater goes to special clean room areas on the ship that have air filtration and require clean procedures for working in, including special suits and gloves. Why all the hard work to keep clean? The trace metal concentrations being measured are so small that contaminants can radically change the results.

Now at after 11 pm, the labs are still humming with activity. Some scientists are running samples, others are reviewing data or writing on the computer. It’s been a busy day.