Around 10 p.m. last night, we gathered on the bridge in excitement as the ship approached iceberg C18a. The iceberg was a bright red line on the ship’s radar but the wispy fog obscured the powerful spotlights sweeping into the night. Soon the lights illuminated portions of a very large, flat-topped iceberg, more than 32 km long and 6 km wide. Throughout the night the ship completed a survey around C18a, taking continuous measurements of ocean properties such as temperature and salinity. John Helly began mapping the iceberg and analyzing the survey data to help the science team plan the sampling strategy that will begin soon.

When we awoke this morning, the iceberg dominated the view. One section of the iceberg calved during the night, and large chunks of ice were floating in the surrounding waters. We saw a small pod of baleen whales, a few fur seals hauled out on larger chunks of ice, and storm petrels flying around the ship. Luckily the weather improved considerably from the day before. It was a very misty morning but didn’t seem too cold, at least for short visits outside behind the bridge.

With improved weather, instrument tests began. In the morning, water samples were collected in two CTD casts, one to 2000m and one to 500m. The water samples collected at 2000m will be used by Tim Shaw’s group as a thorium (234Th) standard. Tim Shaw, Maria Vernet, and Alison Murray began processing water samples from the 500m cast. 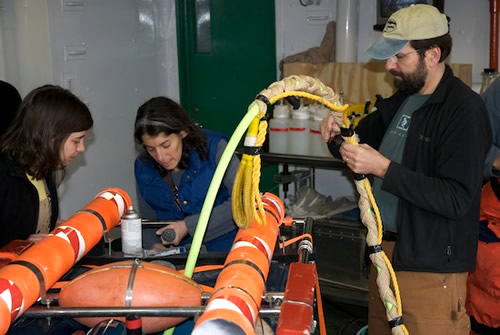 After lunch, Alana Sherman led the test dive of the ROV IceCUBE, deploying it first in its biological configuration. Since this is a complex instrument platform, a lot of work went into planning the deployment, from pre-dive checklists to carefully-orchestrated personnel roles and locations. The dive was successful, with IceCUBE descending to 140m during the short 2-hour dive. Now safely back on deck, IceCUBE will get some adjustments and be changed to its chemistry configuration before another test dive tomorrow afternoon.

Even in the dark, science continues. Tim Shaw’s group tested the towfish and Ben Twining’s group collected water from the shallow tow for instrument tests. Ron Kaufmann’s team put the MOCNESS in the water to test that the nets trip at the programmed depths. Some scientists are taking samples to calibrate instruments or to have background measurements during this testing period. The principal investigators from the different research areas are actively discussing hypotheses about how icebergs affect the surrounding waters, and how best to test those hypotheses.