Just after noon we reached Clarence Island and moved to the east side in what we hoped would be the lee from the westerly wind. Dark jagged peaks covered in ice were hidden in a froth of white clouds. As we approached the island, large glaciers and waterfalls became apparent. Clouds moved in and out over parts of the island, making a dramatic scene. Many of the science team came up to the bridge to see and photograph the island. 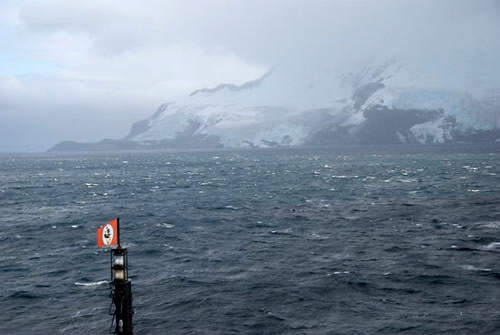 The southern edge of Clarence Island off the bow of the ship.

Unfortunately the winds intensified and the already rolling sea surface spouted white caps and water sprays. The weather continued to worsen, making it impossible to deploy the ROV or other science gear into the ocean for the planned testing. Since the forecast wasn’t any more promising in the short term, Ken Smith decided to keep moving the ship toward the nearest iceberg, C18, another eight-hour steam away. If the weather improves, tests of the MOCNESS and towfish could be done as these devices can be deployed in the dark.

There is hope, too, that as we approach C18 we might find another iceberg, one in the smaller range (~ 2 km size) that can only be detected by the ship’s radar. Even with rough seas, important data can be collected around an iceberg, such as temperature and salinity from the ship’s sensors, until the winds and swell diminish enough to put the other instruments in the water. For now, we continue to prep the labs and gear while we wait for the weather to improve.