Since we can’t simply just drive around the ocean to find an iceberg to study, how do we figure out where to go?

John Helly, collaborating with David Long, has analyzed data from different satellite sources to select possible icebergs. They have processed and reviewed data from radar, scatterometer, and ocean color satellite data. The radar satellite can image icebergs at high-resolution but getting the data takes several months after the time that the information is obtained. Luckily we can receive daily emails from Long’s lab that contain QuickSCAT scatterometer satellite data. The rotating dish of a scatterometer measures the surface reflectivity of the ocean and can reveal icebergs that are at least 4 km in the largest dimension. Ice is highly reflective and looks white on such an image; however, rough waves also can look white as well and can make “ghost” images. The ocean color sensor measures chlorophyll which is an indicator of phytoplankton abundance. Unfortunately cloud cover that can obstruct this sensor is quite common in this part of the world.

Since the large, tabular icebergs that are being targeted in this research can persist for years in the Southern Ocean, it’s possible to get some history on the iceberg’s origins and its travel path. Icebergs are given an alphanumeric name following certain conventions—a letter for the origin quadrant of Antarctica and a sequential number that tracks when the iceberg calved from the continent. Currently there are two possible icebergs near the test site area, C8 and C18. The “C” means these icebergs originated on the other side of the continent perhaps near the Ross Sea. These icebergs most likely moved around the continent in a nearshore countercurrent into the Weddell Sea from the east. The Circumpolar Current that defines the northern edge of the Southern Ocean travels in the opposite direction from west to east around the globe.

The team hopes to find an “A” iceberg that originated from the Larsen or Filchner-Ronne ice shelves to better compare with the previous study targets. It’s not clear whether icebergs from different parts of the continent could provide different levels of trace nutrients to the surrounding seawater. These in turn can influence the growth of phytoplankton communities and the abundance of the grazers, like krill. 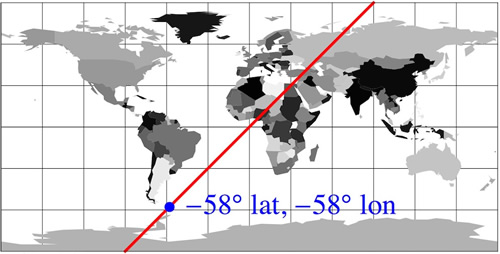 Map showing line of positions of equal latitude and longitude across the globe. Photo by Paul McGill.