The ship passed around Cape Horn today and began the crossing of the Drake Passage. The temperature has been dropping as we head south. The water near Tierra del Fuego this morning was 9°C and air temperature 21°C (70°F). Now in the early evening the water temperature has dropped to 6°C and the air temperature to 8°C with a windchill of -5°C (23°F). 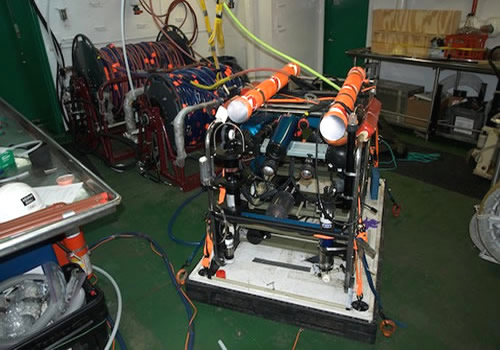 The ROV (foreground) in the wet lab getting prepared for deployment. A red tether with special clean water tubing (background) will be connected for chemistry samples.

The transit time allows important preparations for the science team. The first science meeting was held in the afternoon with the focus on developing a test plan for the first deployment site. The lead scientists of each study group briefed on their research objectives and equipment that will be used. The primary test will be of the ROV. The past few days the engineering team has been connecting sensors, verifying functions, and preparing the ROV for deployment. Two customized tethers, one with special clean-water collection tubing will be tested in the water at the site off Clarence Island.