After the last lines were thrown off the dock, the RVIB Nathaniel B. Palmer left the Punta Arenas port and began its transit across the Straits of Magellan to the Argentine coast and into the South Atlantic Ocean.

The first day at sea was filled with safety briefings and operational training. The ship’s chief mate instructed the science and technical staff about where to “muster” (gather), how to keep exterior water-tight doors “dogged” (closed with extra levers), and the importance of the “gumby” suits (special protective immersion suits). We all practiced putting on our life jackets and immersion suits and getting in a lifeboat so that we will be prepared in case of an emergency. 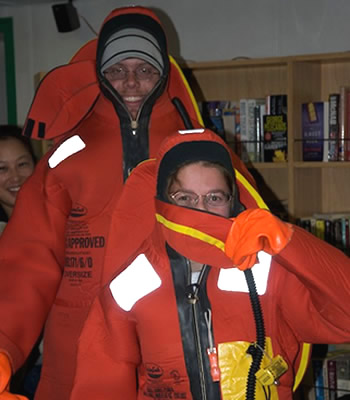 A group of technicians onboard the Palmer support the scientists by interfacing with the ship’s crew for research data collection. The marine technicians trained us on exterior deck safety, where we’ll need to wear float coats and hard hats at all times. Most of the sampling equipment we’ll use will go into the ocean from this area. The hard hats are important protection against overhead equipment and falling ice chunks that can form when the ship works in polar waters. The float coats work like life vests but allow more mobility for the wearer to effectively operate on deck.

The marine science technicians spoke about lab safety. There are several “wet” lab areas where experiments using chemicals will take place. These chemicals must be handled safely. The ship has special cabinets, refrigerators, storage areas, and procedures for chemicals. Even the end of the cruise was discussed briefly, as some samples and chemicals must be shipped back at specific temperatures—all coordinated by the technicians—and critical in many cases for the scientists to get the data they need. 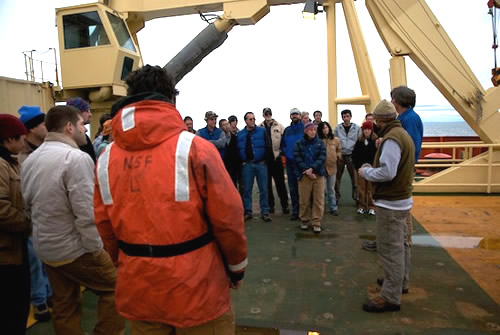 Marine technicians review deck operation safety procedures on the back deck during the the first day at sea. Photo by Debbie Nail Meyer.

The last training of the day gave an overview of the computer network onboard the ship and the array of data collected that are available for scientists in real time. When the ship gets into the open ocean, underway measurements of temperature, salinity, and other parameters will begin.

It will take about a day to pass south down the Argentine coast and another two days after that to reach the first sampling site at Clarence Island, a deeper-water (>600m) site just east of Elephant Island. The team will test instruments in this control area, and also collect important background measurements that can be compared with data collected later around icebergs. During the transit we are anticipating some rough seas due to an advancing low pressure system, so we finished the day by securing loose items, prepping equipment, and calibrating instruments to be ready for the first sampling station.