The RVIB Nathaniel B. Palmer arrived in Punta Arenas late last night and docked behind the ARSV Laurence M. Gould, the other ship in the United States Antarctic Program. The day began early with moving boxes and gear off the ship to the warehouse where it will be stored or shipped back to the United States. Cranes lifted temporary lab vans off the deck and transferred other large items from the ship to the dock. Inside the laboratories, science staff untied lashings that were used to secure gear and moved items to the crane areas. A pile of black duffle bags containing each person’s issued extreme cold weather (ECW) gear was craned to a truck and driven to the warehouse. Each person had to check-in his or her gear at the warehouse, to make sure each glove liner and steel-toed rubber boot was accounted for.

In the afternoon, a group of people transferred the frozen science samples to the warehouse to package for shipping. Sample boxes were put inside larger thermosafe boxes with refreezable ice packs and, in some cases, dry ice. Each box was carefully weighed and labeled with tracking information and handling stickers. 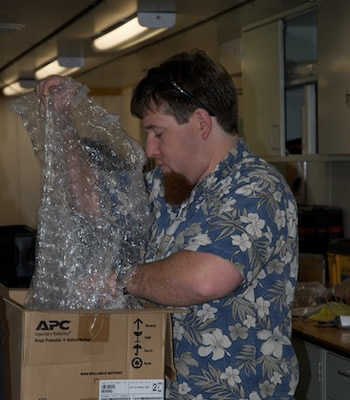 Jake Ellena packs a box for shipping back to MBARI. Photo by Debbie Nail Meyer.

Now nearly all of the work is done and people are packing their personal items and thinking of home. After being on a ship for more than a month, many sounds and smells on land have become more noticeable. It is much quieter without the noise and vibrations of the engines. Trees in the city square have yellow leaves now that it is fall. Today the air smelled wet and earthy after it rained. And a simple pleasure for many was just walking on land—block after block of horizontal distance that could be covered in a long stride.