We came within our first sight of land late this afternoon as the ship approached Isla de los Estados at the southeastern edge of Argentina. The air seemed to smell different and the seas were smoothed by the protection of the coastline.

At this point in the trip, a lot of effort goes into preparing and packing scientific samples for shipment. Marine Science Technician Ethan Norris coordinates shipping samples for the scientists, including managing the many different documents that must be completed. These are not your typical packages. Many of the samples are frozen and must remain frozen for the entire trip back to the United States, a process that takes at least ten days. First, the science team packs their samples into boxes that they store in the various freezers on the ship, such as the -80°C freezer that is in the dry lab. When the ship reaches port, these boxes will be unloaded and taken to a warehouse on the dock where they will be put into special “thermosafe” boxes with ice. The boxes are stored in an environmentally-controlled room in the warehouse until the first shipment flight, usually a Sunday or Monday. The boxes go by air to Santiago where other staff inspect them for the proper temperature and add ice, if needed. From Santiago, the boxes go by air to LAX and then on to Port Hueneme. Along the way temperatures are checked and ice is added to the boxes to keep the samples frozen or at a specified cold temperature. The samples are then shipped to the researcher by a commercial carrier.

The Twining lab, for example, has 13 boxes of 500 milliliter water bottles that are frozen and stored in the dry lab freezer, waiting to be shipped. These samples were obtained from each station where seawater was collected and from the plankton culture experiments that were conducted onboard. It is critical that the samples remain frozen until they can be analyzed for iron-binding ligands by graduate student Hai Lin back at University of South Carolina. 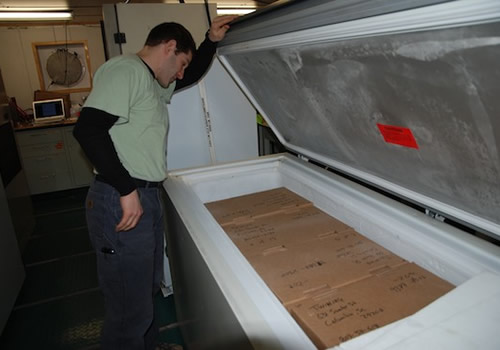 Ben Twining checks the boxes of frozen samples that will be shipped in special temperature-controlled boxes back to the University of South Carolina. Photo by Debbie Nail Meyer.