We are now nearly one-third of the way across the Drake Passage, the notoriously rough waterway that connects the southeastern Pacific Ocean to the southwestern Atlantic Ocean. The Drake Passage is bounded to the north by Cape Horn at the tip of South America, and to the south by the Antarctic Peninsula. Winds and currents are concentrated through this area, which is only 800 kilometers wide. Unlike any other place on the globe, the Antarctic Circumpolar Current (ACC) flows unimpeded around the Antarctic continent with no major land forms to block its flow. Wave energy is reinforced as the winds push the water clockwise around and around. Within the Drake, the ACC travels from west to east as it is pushed by the dominant westerly winds at this latitude. As noted in Alfred Lansing’s book about Ernest Shackleton’s historic expedition in 1914, the “waves [in the Drake Passage] thus produced have become legendary among seafaring men.” 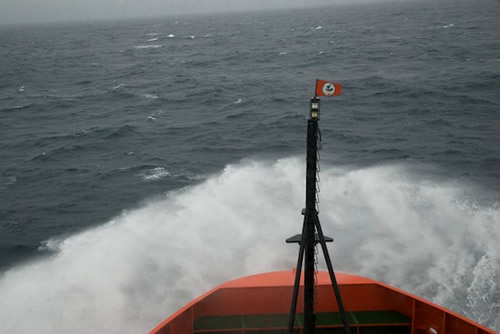 Waves break over the bow of the RVIB Nathaniel B. Palmer as it crosses the Drake Passage. Photo by Debbie Nail Meyer.

The southern edge of the ACC, called the Polar Front, forms a physical barrier for the Southern Ocean and supports biological activity at its boundaries where upwelling of nutrients occurs. Oceanographic measurements by the ship’s underway systems have tracked changes in temperature and salinity that indicate the transition into this front. When we were at latitude 62°S in “Iceberg Alley” just three days ago, sea surface temperature was a chilly -0.5°C. Now, after a little more than one day of transit north, sea surface temperatures have warmed to 3°C.

The Palmer is expertly steering through the growing swells as we cross the Drake Passage. In the late afternoon, swells were 3-5 meters and winds gusted to 15-18 m/s (30-35 knots). These conditions make it difficult to walk across the floor in a straight line and the ship rises and falls against your steps when climbing stairs. But the ship’s size and design counterbalance many of the negative effects of the weather and work carries on.

We have another day in rough seas before we arrive at the Strait of Le Maire on the Argentine coast. From this point, the ship will travel northward along coastal waterways to the Straits of Magellan where it will head southwest toward Punta Arenas.