What does the underside of an iceberg look like?

What does an iceberg look like underwater? ROV IceCUBE has recorded several hours of video footage underneath the icebergs being studied in this expedition, and has uncovered surfaces with pockmarks, linear crevices, caves, and jutting spires. Glimpses of crustaceans like krill and amphipods, jellyfish, chains of salps, and fish that seem to blend in with the ice punctuated the videos. Some of the dimpled suncups of the iceberg’s undersea surface have harbored filaments of algae. 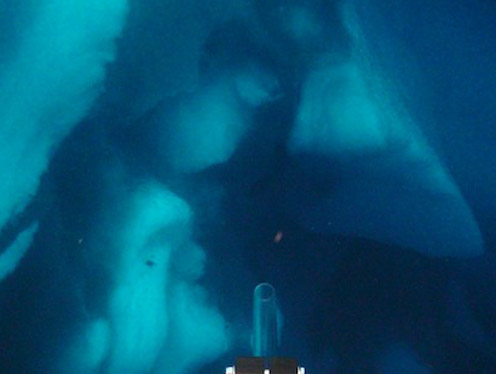 Caves and ledges imaged by ROV IceCUBE during a dive underneath a iceberg in the Weddell Sea. The nozzle in the foreground was used to collect water samples with the ROV that were pumped back to the ship via tubing that was attached to the vehicle’s tether. Stripes on the iceberg indicate land-derived materials incorporated into the iceberg. Credit: MBARI.

Today the ROV IceCUBE successfully completed its final dive of the expedition, exploring a two-kilometer-long tabular iceberg. The ROV, configured with biological sampling devices for the Robison lab, spent nearly three hours in the waters around the iceberg. Although the tether handlers on deck had to cope with falling snow as they reeled the ROV’s lifeline in and out, the vehicle experienced favorable diving conditions and water clarity. One major accomplishment was the completion of vertical transects at the face of the iceberg and two distances away from it. During a transect, the ROV is maneuvered forward over a given distance—in this case, a diagonal line from the depth of the bottom of the iceberg to the surface—and observations are recorded. Today’s transects included both a video record and a plankton net tow for each. Back at MBARI, the Robison lab will analyze the video to identify and count species and features that were encountered. Tonight on the ship, they are sorting the samples collected with the plankton nets, which catch smaller organisms that may not be visible on the video. 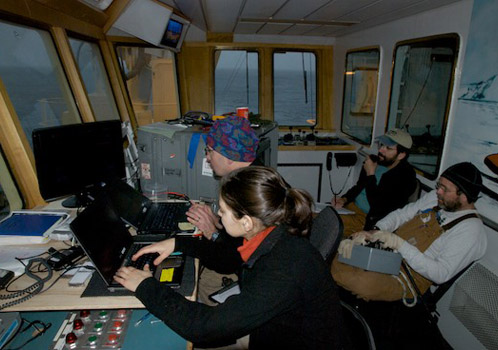 During an ROV dive, pilot Craig Dawe controls the vehicle using a lapbox. Engineer Paul McGill monitors system functions and communicates with the bridge and tether handlers on the deck. Stephanie Bush and Rob Sherlock operate the cameras and video system. Photo by Debbie Nail Meyer.

The last water collections and CTD casts are taking place tonight as the data collection part of the expedition ends. To stay on schedule, the Palmer will begin the transit back to Punta Arenas tomorrow morning. The trip will take several days and includes time for weather delays in the notorious Drake Passage. The barometer is already dropping and we are anticipating some rough seas for the trip ahead. The swell is already more noticeable tonight as the ship rises and falls while on station.