The last set of water collections

The last water collections and science activities finished in “Iceberg Alley” this afternoon. Plans for an ROV dive were cancelled when the potential tabular icebergs in the area were deemed too unstable for study. Based on these observations, Chief Scientist Ken Smith decided that the ship should return to the Lagrangian sediment trap (LST) control area where a larger iceberg was seen on the way, one that was about four kilometers long. We will arrive there late tonight and begin with a deep MOCNESS tow that will continue through the morning. The MOCNESS will be sent down to 1000 meters depth to catch deep-living squid and fish that are of interest to the Robison lab. 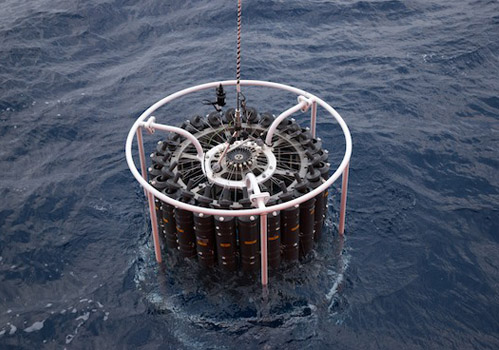 A CTD (conductivity, temperature, depth) rosette is lowered into the water. The Niskin bottles arranged in a carousel are secured open and then closed electronically at depth.

The CTD rosette was the instrument of the day, with six different casts to collect water for the Murray and Shaw labs. Early in the morning, Murray sent the instrument on a deep cast to 3337 meters and trapped water in the rosette’s Niskin bottles where water mass features appeared in the CTD data. Murray’s lab is analyzing microbial activity in the deep layers that are below the sunlit surface zone where phytoplankton grow. The Shaw lab also used the CTD rosette today. They collected bottles of water for radium measurements, filling up pickle barrels for filtering as described in a previous log.

CTD sensors are used on a wide range of oceanographic instruments and measure the underlying physical and chemical properties that provide the context for other samples. Measuring conductivity (the basis for calculating salinity), temperature, and depth, CTDs reveal distinctly layered water masses in the ocean. Often additional instruments are part of the CTD package; for example, a dissolved oxygen sensor measures the concentrations of oxygen that can be used to infer uptake by organisms during respiration.

Here on the Palmer, when a scientist requests a “CTD” it means the carousel or “rosette” of Niskin bottles that is lowered into the ocean from the Baltic Room, the dedicated CTD area on the ship. But CTD sensors are also on the ROV IceCUBE, LST, MOCNESS, and as part of the ship’s underway seawater system. The data files from these different CTDs are saved to the ship’s computer network where scientists can incorporate the data into their studies. Each day on the Palmer profile plots from the previous day’s CTD rosette casts are put into a notebook in the dry lab for scientists to view.