Take to the skies

Today the Vernet, Murray, and Twining labs completed the enrichment experiments. Their teams were hard at work all day processing the last samples from cultures that have been growing in the light van for the past weeks.

In anticipation of favorable weather, the UAV team prepared a plane with a new housing for the GPS drop tag. The design, which looks like a large dart, positions the antenna so that it has more distance above the ground where it lands. The team came up with these modifications after studying the outcome from the GPS tags that were dropped earlier on iceberg C-18A. Both of those tags did transmit data initially, but then unexpectedly stopped. The team hypothesized that the lower-profile tags may have become covered by snow. 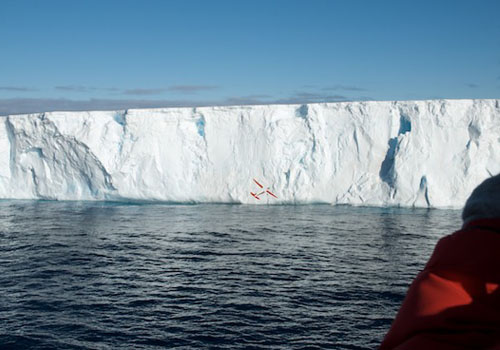 A remote-controlled airplane delivers a GPS tag to an iceberg under study in the Weddell Sea.

Kim Reisenbichler piloted the UAV over one of the larger tabular icebergs in the area. The take-off and landing were picture-perfect in the bright and calm weather. The plane made several passes above the iceberg to record video of its upper surface. The GPS tag was released at what appeared to be over the iceberg, but where it landed could not be determined. Spotters with binoculars scanned the top of the iceberg from the ice tower and then from the ship’s mast, but it wasn’t clear whether the tag hit its target. As the day progressed, no transmissions were received from the tag, confirming that something did go awry with the drop.

The bright sun and small-sized icebergs had consequences on other activities today as well. While preparing for an ROV dive under another tabular iceberg in the area, observations of cracks and melting on the iceberg resulted in the dive being cancelled. It was too risky to put the ship or the vehicle close an iceberg that might have large parts calve during the operation. The ship then steamed to another larger iceberg where a Lagrangian sediment trap (LST) was scheduled for deployment. But after the team evaluated the iceberg’s size and movement, they decided that the iceberg was too small for a useful LST deployment.

As the day ended, we were treated to a colorful sunset while other science activities continued.