We travelled northeast through the night to return to the site where a Lagrangian sediment trap (LST) was deployed three days ago. As the sun rose, the LST team prepared their tracking gear to listen for the device. The ship soon reached the site where the LST was deployed and a transducer was lowered into the water to send acoustic signals. Radio receivers were arranged on the bridge to track signals that the LST would transmit when it surfaced. Back at MBARI, Brett Hobson was on stand-by to call the ship with satellite positions that also would begin when the LST’s antenna rose above the waterline.

Just after breakfast, the team received a call from Hobson with a satellite position. This welcome information confirmed that the LST had reached the surface and helped narrow the search radius. Ken Smith, Alana Sherman, Captain Mike and others on the bridge scanned the horizon with binoculars to spot the LST’s flag. Paul McGill monitored the radio signals using headphones attached to an antenna that he would point toward the horizon and turn side-to-side as he tuned-in the signal. Even with this array of search aids, finding a free-floating instrument in the vast ocean is difficult and not guaranteed. 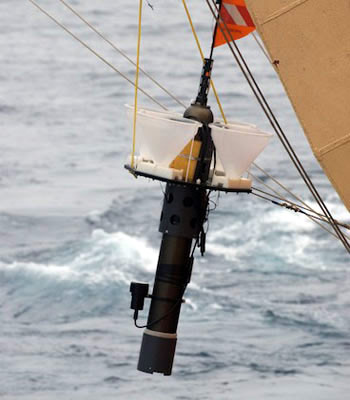 A Lagrangian sediment trap (LST) is lifted onto the deck with the starboard A-frame. The LST drifted at 600 meters depth for three days, during which its four funnels captured particles sinking from surface waters. Photo by Debbie Nail Meyer.

Everyone’s efforts were rewarded mid-morning when the tiny orange flag was spotted on the water nearby. A group went by Zodiac boat to pick up the LST and bring it to the ship. Back in the lab, the science team began looking at some of the samples that were collected by the LST. 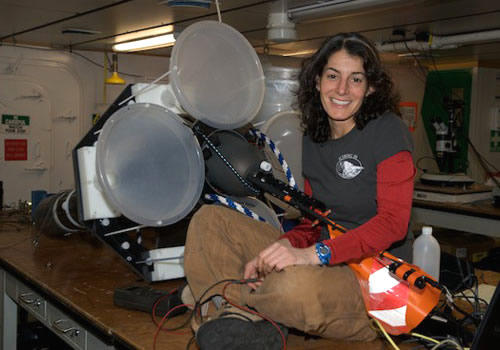 After this success, the LST team decided to prepare the vehicle for one more deployment, targeting a small iceberg in the “Iceberg Alley” area that the ship will go back to tonight. Sherman, Smith, and McGill worked late last night to get the instrument ready for another deployment. First they offloaded the data from the onboard computer that records salinity, temperature, and depth and a record of the acoustic signals that were sent and received. They also needed to change the battery which required disassembling the whole instrument to reach the batteries at its base. After they put it all back together, they ran a suite of tests to verify its functions. Then they added drop weights, ascent weights, and clean sample bottles. And they had to re-rig all of the burn wires, which are used to open and close the sample bottles and to release the ascent weights. A burn wire is exposed to seawater. When an electrical current passes through the wire, it speeds corrosion and causes the wire to break.

In the morning, the team will search for a small iceberg near which they will put the LST back into the water. There it will drift for the next two days to collect particles falling from the surface waters that the scientists will analyze to learn more about how organic matter is cycled in an iceberg-rich area.