A lot of what science is about is repetition: samples collected one day in one location are repeated in the same location on additional days. Often results are compared with sets of similar measurements from other locations. With recent favorable weather and study conditions, our daily science schedule has fallen into a more predictable pattern of sample collection. Today, for example, we began with an overnight MOCNESS tow, CTD and trace-metal-clean Niskin casts, and an ROV dive with the chemistry configuration in the morning. During lunch, the profiling reflectance radiometer was deployed. The pattern changed a bit with the addition of a second, biology, ROV dive in the afternoon, and the day continued with shallow towfish and additional CTD casts in the evening.

Small details give each day a slightly different character. It might be different science activities—a UAV flight, two ROV dives in one day (as it was today), the start or end of an experiment, a different net on the MOCNESS, or a sediment trap recovery that separates one day from another. Or it might be the weather—moods can change dramatically with a sliver of sunlight, a snowstorm, rough seas, a sunrise, or a moonrise. 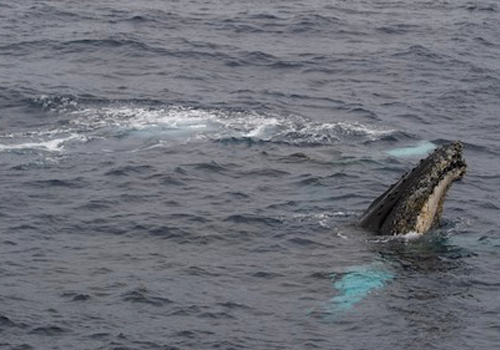 A humpback whale pokes its head above the waterline to view its surroundings, a behavior called spy-hopping. Photo by Ethan Norris.

Changes in scenery and wildlife can also make a day distinct. When the ship first passed through an area with colorful icebergs, striking views made the day special. Wildlife sightings are notable events, such as a glimpse of a whale blow in the distance, a penguin on an iceberg, a fur seal swimming near, or a flock of birds and their calls. 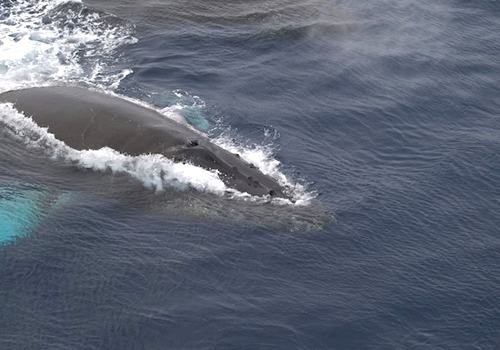 A humpback whale swims near the RVIB Nathaniel B. Palmer in the central Weddell Sea. Photo by Ethan Norris.

Today we had a memorable encounter with a small pod of whales. Three humpbacks cavorted near the ship just after lunchtime. At times, the whales got close enough that onlookers could hear snorts and groans along with their breathing. One whale, less than 6 meters away, poked its head up above the waterline and appeared to look at the ship—a behavior called spy-hopping—exposing knobby bumps and barnacles on its jaw. When the ship moved away to another location for a second ROV dive, three more humpbacks came into view and stayed nearby during the dive.

These small highlights help make each day different even when the underlying science activities repeat.