Smooth seas and a peek of a sunrise greeted the ship this morning. A large flock of Cape Petrels floated on the water nearby and their chirps and calls were audible above the sounds of waves against the hull.

Onlookers gathered on the bow to watch as a Zodiac boat was lowered into the water. Tim Shaw’s group used this small boat to collect pieces of dark ice from the water and from some of the smaller colorful icebergs nearby. Several of the icebergs that we’ve seen have dark grey areas in which pieces of rocks and small boulders can be seen, further evidence that the parent iceberg was once part of a glacier on land. 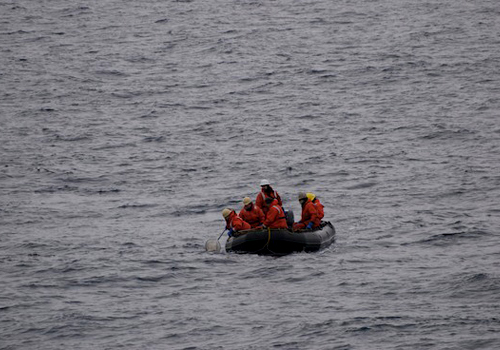 Cole Hexel nets an ice chunk that will be brought back to the ship for further study. Photo by Debbie Nail Meyer.

The ROV team prepared for an afternoon dive near one of the gray and blue icebergs selected by Shaw. The vehicle was launched into the water and it began taking sonar measurements of the iceberg’s shape. The sonar images revealed complex spires and other formations underwater that could potentially entangle the ROV or its tether. The dive was called off and the ROV was recovered back onto the deck. In the remaining daylight before the next sampling event, the ship navigated around other nearby icebergs so that the scientists could select some potential targets for the two ROV dives planned for tomorrow.