Searching for an iceberg amongst many

The iceberg area that we entered today contrasted dramatically with what we had experienced near iceberg C-18A, generating excitement among everyone on the ship. By mid-morning, icebergs of various shapes, sizes, and colors appeared on the horizon. A welcome addition of sunlight highlighted the scenery. Scientists began gathering on the bridge to view and discuss the icebergs as we passed by. They were particularly interested in “dirty icebergs,” those with dark gray stripes or sections, indicating land-derived material. Onlookers viewed distant objects with binoculars and took photographs from the catwalk that encircles the bridge. The search was on for an iceberg that could be studied with ROV IceCUBE. 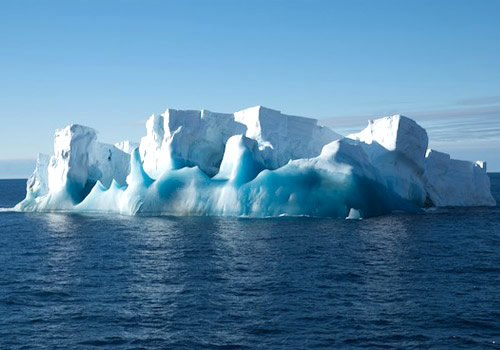 A small iceberg with old blue ice that was chosen for an ROV dive. Photo by Debbie Nail Meyer.

By noon a small, tilted iceberg with old blue ice was chosen. The ship maneuvered slowly around it so that winds, currents, and shape could be evaluated from all sides in order to select the dive location. The weather remained calm with light winds and swell, but the sunlight weakened as low-lying clouds approached. Soon, IceCUBE was launched into the water to begin a biology dive near this new iceberg. The science team enthusiastically watched the ROV video as the dive began. 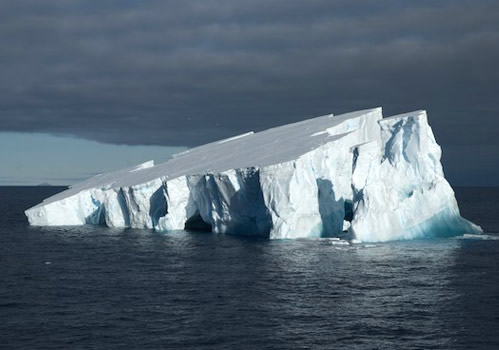 Another side of the iceberg that was chosen for an ROV dive. Photo by Debbie Nail Meyer.

The first observations from the ROV’s video camera revealed ice that was dark blue like the surrounding seawater, resulting in a nearly invisible face of the iceberg below the waterline. Elusive fish were barely discernable from the reflective edges of suncup indentations. The vehicle dove to the bottom of the iceberg, about 125 meters depth. 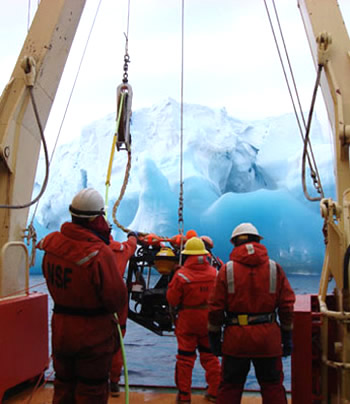 After the ROV dive, the ship moved in range of several nearby growlers and ice chunks so that the marine techs could net some samples for the Shaw lab. As the sun sank into the horizon and clouds darkened the skies, the ship passed more picturesque icebergs. People grabbed their cameras and came outside to watch, and were treated to views of a few penguins, as well as many other birds and an occasional fur seal. Although there are many icebergs in this area, they are distributed widely enough that the MOCNESS is safe to tow. The nets are being readied right now and will soon be launched into the water for a night of fishing.