Today was the final day at iceberg C-18A and researchers pushed to collect their last samples before leaving. ROV IceCUBE completed two biology dives for the Robison lab, one in the morning and one in the afternoon. Excellent ship handling from the Captain and officers on the bridge—nearly eight hours of active positioning mostly by hand—and improved wind and current conditions were integral to the dives. The long day of effort by pilot Craig Dawe and ROV support team was rewarded by successful data collection.

Video from IceCUBE’s camera was broadcast on the ship’s television channels during the dive, providing everyone onboard a view into the undersea world around the iceberg. The iceberg surface below the waterline was dominated by a pattern of scooped out areas (suncups) that appear separated by black lines of shadows caused by the lights of the ROV. Some salps (gelatinous drifting animals) were observed in the midwater, and on fish were spotted on the face of the iceberg (underwater, of course). 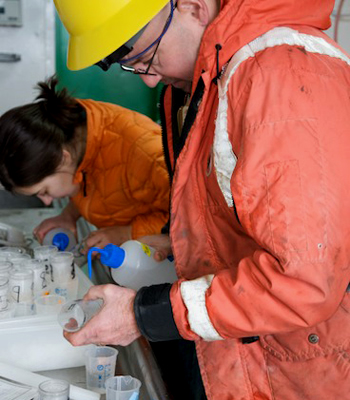 During the afternoon dive, the Robison team and Maria Vernet were excited to encounter some algae associated with the ice, a characteristic they discovered on icebergs in 2005 but had only glimpsed once on C-18A during an earlier dive. On today’s dive, the researchers successfully collected the algae and other specimens using the carousel of sample cups that ROV IceCUBE carries. Vernet viewed a subsample of the algae under a microscope after the dive and confirmed that the species appears similar, and possibly the same, as the algae studied in 2005.

In between the two ROV dives, a second UAV plane was flown over the C-18A where it successfully dropped a GPS tag. Having two GPS tags on the iceberg makes it possible to calculate movement and rotation of the iceberg as it drifts through the ocean.

We have now left iceberg C-18A and are traveling east to an iceberg-free zone, where sampling will take place over the next few days. The waters in this area will be out of the influence of any icebergs, and will therefore serve as controls for measurements and experiments conducted near C-18A.