In a light swirling snow, the MOCNESS nets were brought back onto the ship before sunrise this morning. The catch was noticeably different than the night before in both species diversity and overall abundance. In addition, the nets captured some different animals that hadn’t been seen before. The previous night, an unusually large catch resulted in nets with liters of salps (gelatinous grazers) and one net that had more than 30 liters of Antarctic krill. Unlike most crustaceans, krill exhibit schooling behavior similar to fish, moving together in dense aggregations that can be very large and patchy.Ron Kaufmann’s lab will be analyzing these MOCNESS samples to characterize the differences between sampling stations at various distances from the iceberg. One interesting early observation is that extremely large individuals of the coronate medusa jellyfish Periphylla (some as big as a volleyball and over four liters in volume) have been found only in trawls near the iceberg, within 1.85 kilometers. 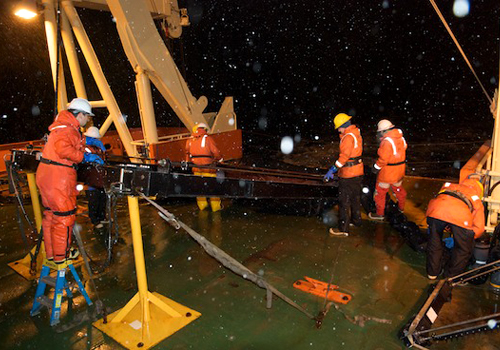 The MOCNESS team recovers the nets after an overnight tow near iceberg C-18A. Photo by Debbie Nail Meyer.

Chief scientist Ken Smith and engineers Alana Sherman and Paul McGill spent the morning and early afternoon retrieving two Lagrangian sediment traps (LST) that have been drifting at depth for the past three days. Both traps were recovered successfully. The samples will be analyzed by the Smith and Shaw labs to calculate carbon export, the rate at which organic carbon is sinking out of the surface waters.

A full day of biology ROV dives is scheduled for tomorrow to wrap up the sampling efforts at iceberg C-18A. Plans for the next study area are being discussed by the principal investigators, and the ship will depart from our current area sometime tomorrow night.