All in day’s work 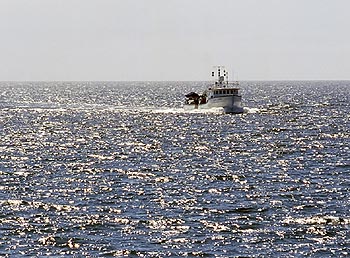 The crews of MBARI’s research vessels are some of the institute’s unsung heroes, often spending long hours at sea helping researchers recover expensive instruments or bizarre sea creatures from the ocean depths. During a recent cruise, however, the crew of the Point Lobos came ashore with an unexpected “by-catch”—four cold, tired kayakers.

The Lobos was headed for home at about four in the afternoon on August 16, having cut short a research dive because of worsening sea conditions. First Mate Greg Maudlin was at the helm, heading toward Moss Landing Harbor at about five knots and keeping an eye out for humpback whales, which had been feeding nearby. Maudlin was just about to make the turn into the harbor entrance when he took one last look out to sea. 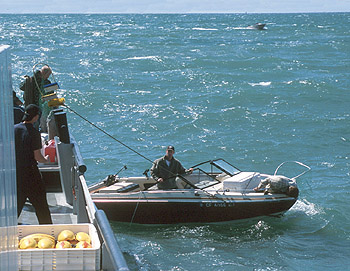 The recent rescue was not the first time the crew of the R/V Point Lobos had come to the aid of other vessels. In 2001, the crew gave a tow to a pair of fishermen whose motor had failed. Image: Todd Walsh (c) 2001 MBARI

Maudlin recalls, “I thought I saw something out there that just wasn’t right. It was just a dark shape rising and falling with the swells… a shape like an overturned boat.” Looking closer, he saw a flash of bright yellow. It was a guy in a plastic kayak. As Maudlin put it , “We figured nobody should be out there in those conditions. That’s why we were coming in.” But he turned the Lobos around and headed back out into the 20-knot winds and steep, three-foot-chop to investigate.

The yellow kayak was about a mile from shore, but drifting downwind toward the north harbor jetty. As the Lobos approached, Maudlin saw a man sitting in the kayak, paddling slowly toward shore. “He wasn’t waving or anything,” Maudlin comments, “but we noticed that he was towing an empty kayak. That didn’t look good.” Then they noticed another person treading water, about 100 yards away. 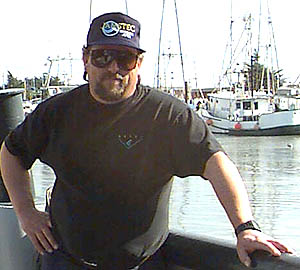 Greg Maudlin, First Mate on the the research vessel Point Lobos, was serving as Relief Captain on the day of the rescue. Image: Todd Walsh (c) 2006 MBARI

Engineer Mark Aiello continues the story, “That guy in the water was tired and cold. He couldn’t get back in his kayak. His buddy was going to have a hard time getting him back to shore before he went hypothermic, especially because the tide was starting to rip out of the harbor channel.” By this time, the crew had spotted two more people in the water nearby, unsuccessfully trying to bail out their kayaks. That made four kayaks and three men in the water.

Under Maudlin’s orders, the crew went into rescue mode. They brought the boat around and lowered a rope ladder for the first swimmer. Once they got him on board and had warmed him with some tea, he explained that this was the first time he had even seen the Pacific Ocean. He and his two buddies had rented kayaks, and had paddled out with a guide to look for whales. However, three of them (including the guide) had capsized in the rough seas. He had been in the 56-degree water for almost an hour, wearing just a thin kayaking wetsuit. 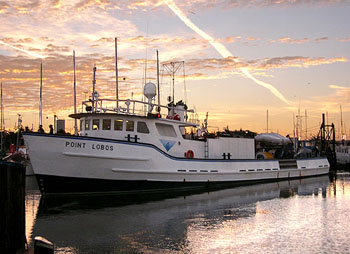 The research vessel Point Lobos heads away from the dock at dawn to spend another long day out on Monterey Bay. Image: Johnny Ferreira (c) 2006 MBARI

Eventually all four of the kayakers had been pulled from the choppy seas. At this point the crew set about rescuing their kayaks, attaching lines to the kayaks with boat hooks, then hauling them up over the side of the research vessel by hand. Meanwhile, the kayaks and the Lobos were drifting rapidly toward shore. By the time they were ready to pull up the fourth kayak, it was too close to the harbor jetty for safety, so Maudlin called it a day and headed for the dock.

Happy to get back on shore, three of the kayakers headed back to the rental shop. The fourth went to look for his boat on the beach. As engineer Aiello put it, “I’m sure glad we didn’t have to pick up the newspaper the next morning and read about a drowning off Moss Landing. The guy in the kayak probably would have made it back to shore, but those other guys had nothing left in them.”

Maudlin and the rest of the Point Lobos crew are typically understated about the risks and challenges they face at sea. But in this case, Aiello gives the credit for heroism to Maudlin. “He was inspirational… cool, calm, collected, and in charge the whole time.” Whether launching three-ton robot submarines, chasing drifting oceanographic buoys, or rescuing four people from the chilly waters of Monterey Bay, it’s all in a day’s work for the crew of the Point Lobos.