A sediment sampling system to be deployed this month 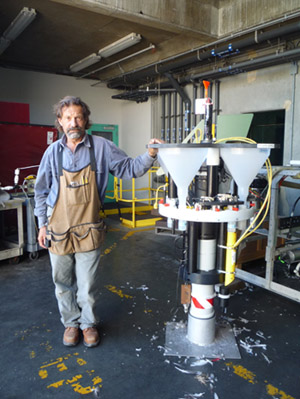 MBARI Mechanical Engineering Technician Larry Bird has built a sampling system that is an essential component of an instrument called the Lagrangian Sediment Trap (LST) that collects particulate organic matter sinking in the ocean. The instrument is comprised of a sediment collection system mounted onto the SOLO1, a “drifter“ float designed and built at Scripps Institution of Oceanography. The LST gets its name from Italian mathematician Joseph-Louis Lagrange, who made notable contributions to both mathematics and astronomy. LSTs were originally designed to sample beneath icebergs; however, these next-generation LSTs will first be used as part of the CANON Initiative to collect sinking matter associated with surface ocean processes such as algal blooms in Monterey Bay. Located in the center of the LST is a “variable-buoyancy engine,” allowing it to stay afloat consistently at a set depth, and resurface on preset time intervals. The sampling mechanism is operated with springs that make use of corrosion wires to rotate small collection jars beneath large funnels to collect samples. Two LSTs will be deployed in Monterey Bay on September 16.