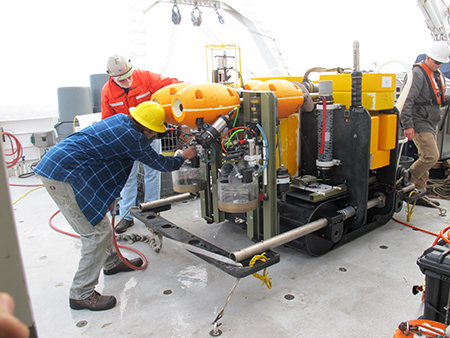 Marine ecologist Ken Smith (in red) and John Ferreira (in blue) take a look at some of the mechanics of the Benthic Rover on the deck of the Western Flyer.

Imagine if a car, a computer, or a battery-operated appliance could work reliably without maintenance for an entire year of operation. Also imagine that device being lowered into the ocean to free fall 4,000 meters to the seafloor, land upright, and travel across the seafloor autonomously while collecting scientific data for an entire year. 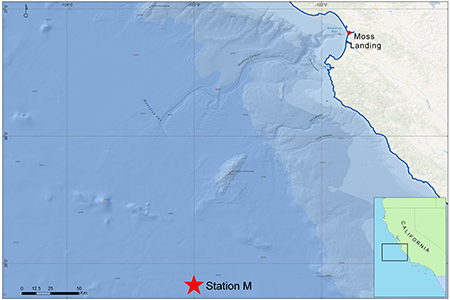 Station M is approximately 220 kilometers (136 miles) from the California coastline.

The Rover operates at Station M—an area of flat, muddy, abyssal seafloor 4,000 meters (2.5 miles) deep and approximately 220 kilometers (136 miles) from the California coastline. MBARI marine ecologist Ken Smith and his colleagues have been studying Station M since 1989. Some of their instruments measure sinking particulate organic carbon (POC) in the form of marine snow—bits of phytoplankton and zooplankton detritus, as well as fecal matter—that drifts down to the seafloor. Organisms in this abyssal realm rely upon marine snow as their primary source of food. The Benthic Rover records how much of the marine snow is consumed by the seafloor community.

One of the most significant findings from the last few years of the Rover’s deployments involved several large pulses of marine snow that rapidly sank to the seafloor. These pulses may be related to stronger along-shore winds that drive the upwelling of nutrients in coastal waters. The nutrients spur the growth of phytoplankton and zooplankton, which increases the amount of marine snow that rains down to the seafloor. 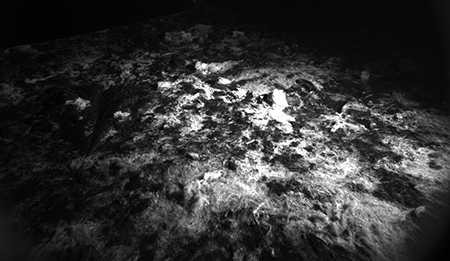 The Rover detected several brief, two- to four-week events when nearly an entire year’s worth of chlorophyll-rich detritus landed on the seafloor. These events would have gone undetected without the long-term presence of the Benthic Rover.

In documenting such events, the Rover helped solve an important piece of Earth’s carbon-cycle puzzle—showing that a much larger percentage of carbon than previously expected can sink rapidly from the surface into deeper water. These periodic events can now be factored into global climate change models. 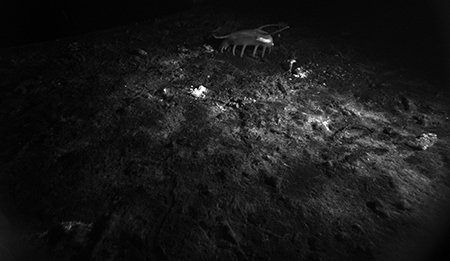 An image from the Rover’s fluorescence imaging system showing the fluorescent glow of the chlorophyll on the seafloor sediment and in the gut of a Scotoplanes sea cucumber (at the top of the image).

When marine snow arrives on the seafloor, some is eaten and respired as carbon dioxide while some is sequestered (buried in seafloor sediment). Information about how much carbon is respired and how much is sequestered is important data for climate science. As Smith wrote in a 2013 paper, “A major unknown component of the global carbon cycle is the amount of organic carbon that reaches the deep ocean and its ultimate utilization or long-term sequestration in the sediments.” The Benthic Rover is unlocking this mystery by measuring the activity of seafloor organisms and by taking photos of the surface of the seafloor. 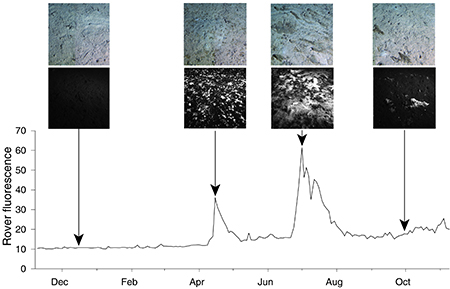 This graph shows the spikes of chlorophyll-rich detritus with corresponding images (standard photographs and fluorescence images) of the seafloor before, during, and after the peak events on the seafloor.

While in transit, the Rover takes overlapping images every meter with a high-resolution camera to document seafloor animals and detritus. It also carries a fluorescence-imaging system that detects the wavelength of light given off by chlorophyll from phytoplankton that sank from the surface waters.

Each day or so, the Rover travels about 10 meters across the seafloor then stops. After pausing to allow any mud it may have stirred up settle down, the Rover lowers two chambers into the seafloor to measure how much oxygen is being consumed by animals and microbes in the mud. 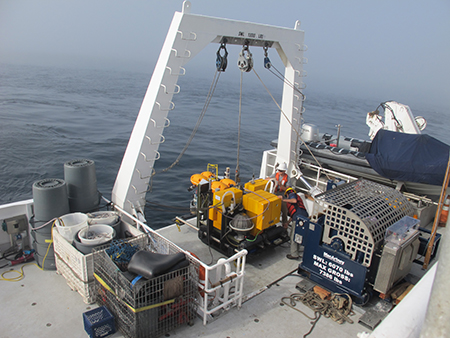 The Benthic Rover sits on the deck of the research vessel Western Flyer, ready to be lowered into the sea.

In November 2016, the Rover was retrieved after its record run—operating for one year and two days, and traveling a distance of 1.6 kilometers (about one mile). The Rover has been operating autonomously since 2009 and has been steadily increasing its duration of deployment and distance traveled before needing to be brought onboard a research vessel for maintenance.

During a typical maintenance run, the Rover is brought back to the surface ship, where MBARI electrical, mechanical, and software engineers conduct routine maintenance and apply upgrades, and biologists retrieve the scientific data from the Rover’s instruments. Like a racing pit crew, the team works quickly—after just a day or two, the Rover is lowered back to the seafloor, where (with any luck) it will operate on its own for another year.

The success of the Benthic Rover exemplifies the collaboration of MBARI’s scientists and engineers, almost a dozen of whom worked on the Rover. The Rover is currently continuing its mission on the seafloor at Station M, while Smith and his fellow researchers are back on shore analyzing the data it collected over the past year. They are learning how life on the seafloor finds enough food to survive, and how the Earth’s changing climate is both affecting and being affected by life in the abyssal depths of the ocean.