A new way to retrieve data from AUVs 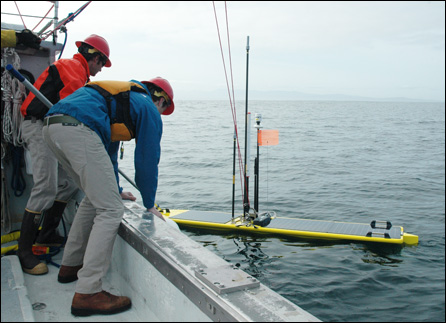 Brian Kieft (left) and Liam Chaffey (right) positioned the Wave Glider hotspot before it was hoisted aboard the R/V Paragon with the help of Thom Maughan and Mark Chaffey (not shown).

As their name implies, autonomous underwater vehicles (AUVs) navigate through the ocean on their own. In situ sensors on the AUVs measure physical characteristics (such as temperature and salinity) that are useful for scientists. But how and when do MBARI scientists access these data from AUVs? Dorado must be recovered after its missions and brought back onto the ship before its data can be uploaded. Tethys, a long-range AUV, can send information when it surfaces but the data are highly compressed.

MBARI’s engineering team understood the scientists’ dependence on real-time data during field experiments so they looked to the Wave Glider, a commercially manufactured instrument, to alleviate data-retrieval issues. Software Engineer Brian Kieft and his team used the Wave Glider to rendezvous with an AUV and serve as a hotspot to better communicate live data to scientists onshore. Last Friday, the team recovered the Wave Glider hotspot after a successful mission. The hotspot transferred high-resolution data from a long-range AUV and buried seafloor instruments (called Benthic Event Detectors) to shore.