A hot time in Monterey Bay 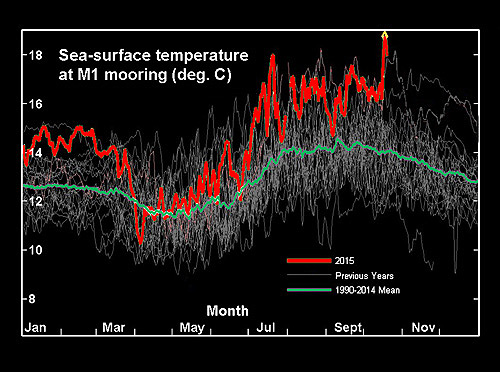 MBARI researchers have been monitoring seawater temperatures at our M1 mooring in the middle of Monterey Bay since 1990. Biological oceanographer Francisco Chavez has been analyzing these data to find out how they reflect conditions in the Pacific Ocean as a whole. This week Chavez noted, “On October 17, 2015, we set a new record for the warmest daily sea-surface temperature ever measured by the M1 mooring during it’s 26-year history—18.74 degrees Celsius (65.7 degrees Fahrenheit). El Niño is here.”