The halfway point of the MBARI summer internship was marked by a four-day holiday for the Fourth of July. Interns visited family and friends, took trips, and explored the area.

One group of interns took day trips to San Jose, a redwood forest, Big Sur, and a mentor’s sailboat for a Fourth of July barbecue.

Check out the size of that enormous redwood trunk! Left to right: David, Ellie, and Rachel. Image courtesy Emma Bueren

Day one took Ellie, Rachel, and David to San Jose’s Veg Fest, where there was tofurkey, seitan, and vegetables as far as the eye could see. Although David was the only meat eater in the trio, his dinner was so delicious it almost convinced him to give vegetarianism a try. Will an upcoming vegan documentary night fully convert him? Check back next week to find out.

The next day, Emma joined the three to visit Big Basin State Park. They set off to find Sempervirens Falls and Slippery Rock, marveling at the gigantic redwoods along the way. Plenty of time was spent poking around the tree trunk caverns, known as “goosepens,” which are formed during forest fires.

After eating lunch at the Sempervirens Falls, the quartet finally made it to Slippery Rock, only to discover that the summer heat had baked away any algae found during the wetter months. Luckily, this made it easier to climb up the steep rock—although everyone’s legs were aching by the time they reached the top.

One five-mile hike was not enough for this adventurous crew, and so after a quick break to refill water bottles, they attempted a second hike along Dool trail. Somewhere along the trail, a turn or two was missed, and the pleasant three-mile hike turned into a seemingly endless uphill expedition. Finally, after helpful directions from a family encountered on the trail, the interns were able to find their way back to the visitor’s center and, eventually, the car.

The third day led the interns to Pfeiffer State Park at Big Sur, which had opened only days before for the season. Most of the more strenuous hikes were still closed, but after the previous day’s adventure, a pleasant three-mile loop sounded just fine. The group found more gigantic redwoods but, more exciting, they also found a refreshing creek to jump in. 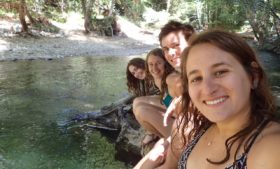 Four interns sat on a log, where it was nice and cool. Back to front: Emma, Ellie, David, Rachel. Image courtesy Rachel Kahn

Although chilly, the interns had quite a bit of fun swimming, skipping stones, and trying to take a group underwater picture. Rachel impressed them all with a nearly 10-skip stone, which crossed the creek and ended up on the other side. 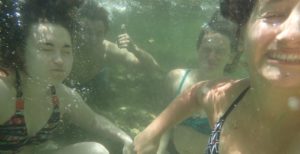 For the final day the group, now joined by a fifth intern, Beverly, were invited to a sailboat barbecue, hosted by Rachel’s mentor, Mike McCann. The vegetarians (plus David and Beverly) grilled up a storm of veggie dogs and burgers, asparagus, pineapple, zucchini, and heads of romaine lettuce—the last of which received a hit-or-miss reaction. 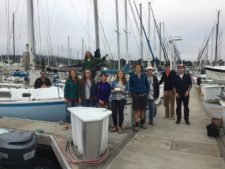 Afterwards, the interns took a trip to the Watsonville Airport to watch a fireworks show with a coastal twist. The night’s fog layer created an impressive, almost Aurora Borealis-like effect, turning the entire night sky into broad swaths of color. 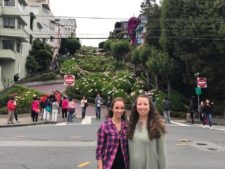 Ash and her friend Sam took a trip to visit San Francisco, where they visited the iconic Golden Gate Bridge and Lombard Street. They also made sure they had time to check out the Fuller House—the house where the television show “Fuller House” is filmed. 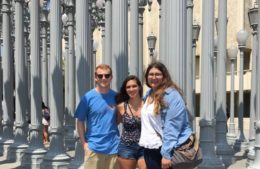 Meanwhile, Victoria headed south to show her hometown of Los Angeles to two of her friends who are part of the Research Experience for Undergraduates (REU) program, operated at California State University, Monterey Bay. Victoria is a dual MBARI and REU intern—the best of both worlds! The group visited the Los Angeles County Museum of Art, the red carpet at the Universal Citywalk, and the Aquarium of the Pacific before returning to Monterey.