A farewell tribute to the research vessel Point Lobos 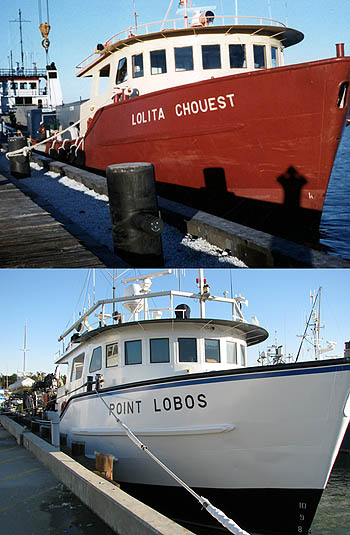 It was standing room only on the bridge of MBARI’s research vessel Point Lobos on December 1, 2011, as the boat headed out into Monterey Bay for its last official science cruise. After the boat reached its study site, screaming 32-knot winds nearly forced the researchers to abandon the day’s dive using the remotely operated vehicle (ROV) Ventana. But with a tough crew standing by and a sturdy boat under their feet, the captain and the research team decided to wait for a while to see if the wind would subside.

While the boat bobbed around in chaotic seas, hundreds of Pacific white-sided dolphins frolicked nearby, as if bidding adieu to a familiar sight in the bay. After an hour or two, the wind finally lightened enough to allow the crew to launch the ROV. For the next six hours, MBARI biologist Bruce Robison used the ROV to study deep-sea animals—something he has done on board the Point Lobos for well over two decades.

As the ROV returned to the surface, the wind again rose to over 30 knots. But in a well-practiced display of teamwork, the ROV pilots and the crew of the Point Lobos deftly recovered the heavy ROV back onto the boat. The tough conditions had tested both the scientists and the crew, but they passed with flying colors.

For over 20 years, the Point Lobos has been MBARI’s workhorse research vessel, ferrying the ROV Ventana out of Moss Landing Harbor several times a week. During a remarkable 3,697 cruises, the Point Lobos helped researchers record thousands of hours of video, identify dozens of strange and unusual animals, and deploy hundreds of instruments in the depths of Monterey Bay.

The Point Lobos was built in 1981 as a supply vessel, servicing offshore oil derricks in the Gulf of Mexico. Originally named the Lolita Chouest, the 110-foot boat carried water and drilling mud in large tanks within its hull. In 1987, the newly formed Monterey Bay Aquarium Research Institute purchased the boat for $300,000 and renamed it the Point Lobos. The boat steamed into Monterey Bay on February 22, 1988 to become MBARI’s first research vessel. Over the next few months, MBARI staff converted the oil-field boat into a modern oceanographic vessel, tearing out bunks, adding heavy lifting cranes, upgrading power systems, and building labs, machine shops, and an ROV control room. 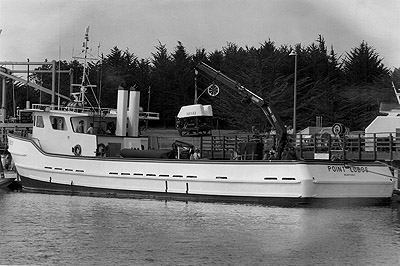 During MBARI’s early years, the Point Lobos docked at Breakwater Cove in Monterey Harbor. In this photo, ROV Ventana (with its original white foam pack) is being lifted onto the boat using an early launch crane.

David Packard, MBARI’s founder, took a personal interest in the purchasing and refitting of the Point Lobos. The crew remembers that, while the boat was being outfitted in Monterey Harbor, a tall stranger stepped aboard the boat and begin poking around. The boson, Bill Wardle, firmly asked him to leave. The stranger politely introduced himself as David Packard… and then commended Wardle for being a good watchdog.

The Point Lobos crew faced many challenges while learning how to deploy and recover the ROV Ventana, one of the first scientific research ROVs in the world. The first year or two saw quite a bit of trial and error, wildly swinging launch cranes, broken gear, and at least one incident in which the ROV’s tether became tangled in one of the boat’s propellers.

Embarrassingly, the tether mishap took place during a dive when David Packard and some of MBARI’s division directors were on the boat. It was 1989 and the ROV Ventana was being used on an exciting expedition to search for the wreck of the USS Macon, a US Navy dirigible that sank into the sea off the coast of Big Sur in the 1930s. 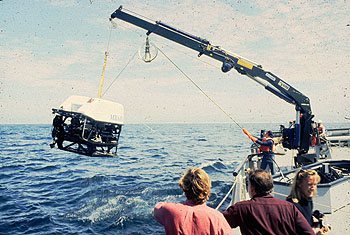 This photo, taken in September 1989, shows an early launch of the ROV Ventana from the deck of the Point Lobos.

Although the crew of the Point Lobos managed to untangle the ROV tether, one of the boat’s transmissions failed shortly afterward, forcing the Point Lobos to limp back to port on one engine. At that point, Packard—impatient to return to land—commandeered a nearby fishing vessel. For a fee of $1,500, the fishing boat carried Packard and the directors back to Monterey Harbor. In the end, the fishing boat beat the Point Lobos by only 45 minutes, and many of the directors became seasick during the ride back.

Steve Etchemendy, MBARI’s director of marine operations since 1989, described the Point Lobos as MBARI’s “starter vessel” for getting into ROV-based science. That “starter vessel” lasted 23 years, and played a significant role in many of MBARI’s engineering and science projects. “You name it, and it’s probably been tested by the Point Lobos and ROV Ventana,” said Etchemendy.

Few MBARI researchers have spent more time on the Point Lobos than Senior Research Technician Patrick Whaling. Whaling, employed by MBARI since its inception, now works for MBARI researcher Jim Barry, studying animals that live on the deep seafloor. Working for Barry, Whaling racked up at least 378 days on the Point Lobos. He spent many additional days at sea helping with seawater-sampling cruises that the Point Lobos performed once or twice a month for the last two decades.

Although Whaling’s nine overstuffed black notebooks hold the scientific details of his cruises, his most interesting tales are stored in his head. During Whaling’s first cruise on the Point Lobos, the boat conducted ROV operations during the day and water sampling at night. He still remembers how diesel fumes and the smell of frying abalone had him “feeding the fish.” Whaling’s most memorable ROV dive involved an unexpected encounter with a sunken shipping container on the seafloor. The ship’s crew speculated that the container might be full of expensive French wine and concocted wild schemes on how to open it. Later the shipping company that lost the container reported that it was full of radial tires. 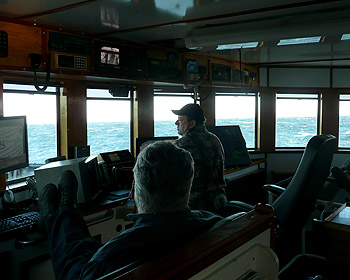 Another MBARI researcher who has spent hundreds of hours on the Point Lobos is marine biologist Bruce Robison. A founding researcher at MBARI, Robison has relied heavily on the Point Lobos to monitor long-term changes in the midwater environment. “I’ve spent more time on the boat than I’ve spent at my house,” he said. Over time, Robison became more confident in the Point Lobos as he learned to adjust to the motions of the boat—motions that have challenged many experienced seagoers. Adjusting to a new boat, Robison said, will involve not only adapting to a different deck and cabin layout, but also to new and unexpected ship motions.

To Robison, the Point Lobos represented a crucible, where science advanced through the efforts of both theorists and seasoned sailors. Theorists discovered the challenges of working at sea, while the experienced crew of the Point Lobos repeatedly helped researchers meet and overcome those challenges. “The Point Lobos is where all of our operation folk learned to be good field scientists,” he said. “And scientists now have a better idea of how technology works.”

Despite its almost daily use in all kinds of sea conditions, the Point Lobos has been remarkably reliable. Much of the credit for this must be given to Mark Aiello, who has served as the ship’s chief engineer for the past 18 years. Aiello’s engine room is a model of neatness and cleanliness, with engines that not only purr, but are so clean you could eat off them. Asked how he does it, Aiello said simply, “I love this boat.”

Another longtime Point Lobos crew member is Chief Mate Greg Maudlin, who piloted the boat during its final research cruise. The Point Lobos has served as Maudlin’s office, job site, and home away from home. Maudlin’s introduction to the boat was in 1988, when he was asked to sandblast the original orange paint from its hull—an unpleasant two-week job he’ll never forget. Starting as deckhand and then working as chief mate, engineer’s helper, and relief captain, Maudlin said he has “so many memories on the Point Lobos, I can’t keep track of them.” Questions about the Point Lobos normally garner the response, “Go ask Greg Maudlin.”

Maudlin particularly remembers helping install the MARS underwater observatory in Monterey Bay, as well as heading out into a storm to recover an MBARI buoy that had broken loose and was drifting out to sea. Over the years, Maudlin, along with the rest of the Point Lobos crew, also rescued a number of kayakers and recreational fishermen from the boisterous waters of Monterey Bay. After these experiences, the Point Lobos’ final cruise in choppy weather marked an “easy” day at sea for him.

The retirement of the Point Lobos is just part of an ongoing shift in MBARI’s marine operations program. In spring 2012, MBARI will also be retiring the research vessel Zephyr, which serves as a launch platform for MBARI’s autonomous underwater vehicles (AUVs). These two boats will be replaced by a single, larger boat, the Rachel Carson, which MBARI purchased in the summer of 2011. The new boat will be able to launch both ROVs and AUVs, as well as conduct multi-day expeditions.

According to MBARI’s Deputy Director of Marine Operations Chris Grech, cuts to MBARI’s marine operations budget have made it more cost effective for the institute to run one boat rather than two. “What we’ll miss most is the flexibility of having daily operations. It will be tough to adjust,” said Grech. 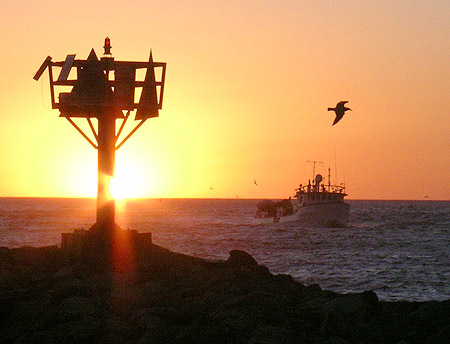 The rough weather during the Point Lobos’ last research cruise didn’t stop the crew from completing a full day’s ROV dive. When it was all over, the Point Lobos returned to Moss Landing Harbor at sunset. Photo: Kim Fulton-Bennett © 2011 MBARI

The Rachel Carson left its home port of New Orleans and began steaming toward Monterey on December 1, 2011, the same day that the Point Lobos made its last research cruise. During the spring of 2012, the ROV Ventana, the ROV launch crane, and much of the gear from the Point Lobos will be transferred to the Rachel Carson. The new boat is expected to be operational by July 2012.

MBARI staff and the Point Lobos crew are understandably proud of the innovative science conducted aboard the boat. Future research expeditions onboard the Rachel Carson will no doubt benefit from the positive attitude and decades of experience that MBARI researchers and marine operations staff acquired on the Point Lobos.

After serving the MBARI research community reliably for 23 years, the Point Lobos will be remembered for its role in advancing our knowledge of the deep sea. The crew and ROV pilots on the Point Lobos helped establish MBARI’s reputation for high-caliber ocean research, and set the bar for ROV-based science. The vessel is strongly woven into MBARI’s history and its legacy—exposing scientists and the public to the enigmatic wonders that lie beneath the surface of Monterey Bay.

Photo essay of the last research cruise on the Point Lobos