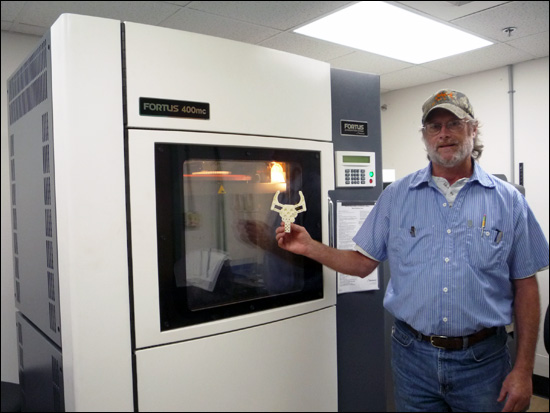 Ray Thompson, the machine shop supervisor at MBARI, in front of a 3D printer.

Inside the machine shop at the Monterey Bay Aquarium Research Institute (MBARI) is a rectangular metal box that looks like it could be a large refrigerator with a built-in microwave. In actuality, this enormous container is a three-dimensional (3D) printer, one of two professional 3D production systems at MBARI.

“Since the machine shop manufactures most of the parts for the institute,” explained Machine Shop Supervisor Ray Thompson, “they were added as another tool to be used for manufacturing purposes.” In-house 3D printing reduces both costs and production time. Instead of hiring a printing company to build a customized part and waiting a week for its delivery, MBARI machinists are equipped to produce parts in less than a day.

Traditional manufacturing methods are typically subtractive–a block of material is cut or drilled down to the desired shape. The 3D printing process, called additive manufacturing in industrial jargon, involves adding layer upon layer of material to form a product. At MBARI, mechanical engineers envision a product then create a digital file that acts as a blueprint for a 3D printer. The file is then sent to the machine shop for production. With two high-definition 3D printers in the machine shop, MBARI can produce more parts on the spot. “We make parts that are used not just for design, but for function,” Thompson said.